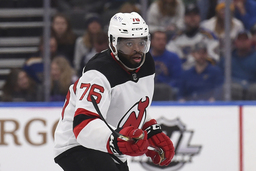 By The Associated Press

Subban, who was an unrestricted free agent this summer, has done television in the past and hinted at new opportunities in his retirement post.

"Having that perspective allowed me to enjoy every shift like it was my last, celebrate every goal with emotion and play every game as if someone paid to watch me who had never seen me play before."