Parade of champs: Avs live it up as they celebrate Cup title 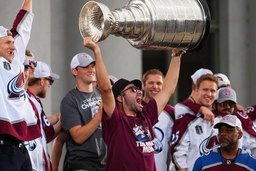 DENVER (AP) There was Nathan MacKinnon jumping off the fire truck so he could walk the streets and shake hands with the swarm of Avalanche fans.

Later, Erik Johnson took the stage and got the crowd to participate in a giant sing-along to the team's adopted anthem, "All The Small Things" by blink-182.

From "A" (alcohol, lots of alcohol) to "Z" (Zamboni drivers taking the road), the parade held Thursday to celebrate Colorado's Stanley Cup title offered a little bit of everything.

That included dogs wearing Avalanche gear, young defenseman Bowen Byram being momentarily confused for a fan by security, the crowd chanting "We Got The Cup," and a shirtless Gabriel Landeskog hoisting the Cup they secured by beating the Tampa Bay Lightning. It was Nazem Kadri who delivered the line of the day on stage as rain fell and thunder boomed.

Kadri made sure to savor the moment. This may have been his farewell party, too. An unrestricted free agent, he's not sure if he will be wearing an Avalanche jersey next season. A conversation for later.

"We're going to be celebrating for a while," Kadri said. "We're going to enjoy it. This stuff doesn't come around too often. So you've got to make sure you soak it all in."

Byram sure did. The 21-year-old was running around the streets like a kid in a candy store as he greeted fans. He was also mistaken for a fan himself, before the crowd pointed out he was a player and he rejoined the parade.

It was a sea of burgundy and blue at Civic Center Park, where the parade ended and the speeches took place.

"I can't even see toward the end," Kadri commented.

That's what happens when a team wins its first Cup in 21 years.

"It just shows how great of a sports city Denver is," Byram said. "Unbelievable."

Before the festivities heated up, the band Big Head Todd and the Monsters entertained the crowd. There were also several renditions of "All The Small Things," including the version started by Johnson. The Avalanche fans have adopted the tune and sing along to it in the third period.

One of the touching moments was Landeskog walking in the street hand-in-hand with his daughter. Later, while on stage, he took off his shirt and wore a Swedish flag.

Mikko Rantanen was having a grand time on the fire truck, dancing, posing and even drinking out of a shoe.

"I lost any ability to speak English after the parade," Rantanen quipped.

The beer flowed freely along the parade route. On another beer note, it was also the debut of this - a limited version of Coors Light made from shavings of the Ball Arena ice the Avalanche skated on during their title run.

The Avalanche were certainly cool as ice in going 16-4 over the postseason. That seems far away from the 2016-17 season where they finished with a lowly 48 points.

To think, last postseason MacKinnon lamented on having won nothing following a third straight exit in the second round.

"My ninth year I finally won something," MacKinnon cracked.

One of the biggest cheers was for Avalanche Hall of Fame forward turned general manager Joe Sakic, who became the first in league history to win the Stanley Cup as a captain (1996, 2001) and later as general manager for the same franchise.

One of the more emotional speeches belonged to even-keeled coach Jared Bednar, who was awed by the sacrifices the team made to win the title. Like Valeri Nichushkin, who was in a wheelchair Thursday.

Some players still had their playoff beards (See: MacKinnon, Landeskog, Rantanen). Others got rid of them.

Kadri wore a bucket hat and a witty shirt with "Too many men" written across the front. It was a reference to the Lightning thinking the Avalanche had too many players on the ice when Kadri scored his overtime winner in Game 4.

Cale Makar was still making plays during the parade. The young defenseman, who won the Conn Smythe Trophy as the MVP of the postseason, caught a stuffed animal thrown at him on the fire truck and placed it on his award.

It was his speech, though, that really generated loud applause. With rain falling, Makar got on stage and shouted: "No one's raining on our parade today!"