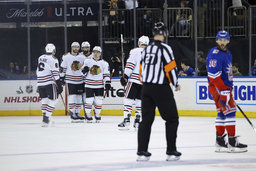 Reese Johnson and Taylor Raddysh also scored for Chicago, which won for the first time since Nov. 12 at Anaheim and had won just two of its previous 16. Petr Mrazek stopped 21 shots over two periods and Arvid Soderblom had five saves in the third as the Blackhawks improved to 6-3-0 at Madison Square Garden since February 2012.

"It's huge. We've been looking for it for a while," said Domi, who leads the Blackhawks with nine goals. "Our special teams were solid and we found a way to stay composed with the game on the line."

Blackhawks coach Luke Richardson was pleased with the win despite getting hit on the right side of his head with an errant puck behind the bench early in the game.

"I feel good, we got a win,? he said. "I'm really happy. The guys have been playing well and battling hard."

Mika Zibanejad and Chris Kreider scored for the Rangers, who have lost five of their last six overall (1-4-1) and four straight (0-3-1) at home. Artemi Panarin had two assists and Jaroslav Halak had 16 saves.

The Rangers trailed 3-1 heading into the third and seemed to have momentum after Zibanejad scored late in the second. The Blackhawks were then forced to change goaltenders because of a groin injury to Mrazek but it was Chicago that scored the next goal.

"You get a big goal heading into the third and don't do anything with it. It's definitely disappointing," said Rangers captain Jacob Trouba, who fought Chicago's Jonathan Toews late in the second. "It's a hard game and you have to play it hard. There needs to be more of a pushback. You can't keep doing the same thing and expect a different result."

"We wanted show we weren't going to cave and we showed that with what Tayzer did," Kane said referring to Toews fighting Trouba after Trouba levelled Andreas Anthanasiou with an open-ice check. "A great win for the team."

Kane and Toews have been teammates for 15 seasons and are six games away from playing 1,000 games together with the Blackhawks.

"It's been a fun ride with him, going through things at a young age and now as time has evolved," Kane said. "It's fun to go through it with him to this day, bouncing idea off each other."

Zibanejad got the Rangers on the scoreboard with 2:09 left in the second with his team-leading 13th.

Raddysh restored the Blackhawks' three-goal lead with a power-play score at 4:46 of the third, his seventh of the season and Chicago's third man-advantage goal of the game.

The 34-year-old Kane, who has spent his entire career with the Blackhawks and will be an unrestricted free agent next summer, has points in seven of his last eight games against the Rangers. Kane leads the team with 20 points and his assist on Raddysh's power-play goal early in the third was the 1,200th point of his 16-year career.

"It's nice to reach it, obviously," Kane said. "It feels good and nice to get it like this, where you get a win and can contribute to the team too."

Blackhawks: At the New York Islanders on Sunday night.