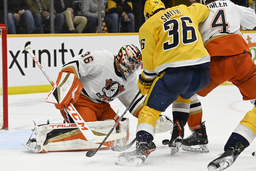 NASHVILLE, Tenn. (AP) Roman Josi scored at 3:50 of overtime to give the Nashville Predators a 2-1 victory over the Anaheim Ducks on Tuesday night.

Juuse Saros made 34 saves and Colton Sissons also scored for the Predators, who have won two of their last three games. Matt Duchene had two assists.

Nashville played for the first time since last Monday, after a water main break flooded Bridgestone Arena on Friday, leading to the postponement of that afternoon's game against Colorado and Saturday's game against Columbus.

"It was great to be back," Josi said. "I think we were all a little sad we couldn't play this weekend, a game after Thanksgiving."

Troy Terry scored, and John Gibson made 39 saves for the Ducks, losers of three straight and six of seven.

"What he's been doing for this team and what is expected of him every night, is not always fair to him," Terry said of Gibson. "His attitude this year, his work ethic, it's really been what's been our lifeline this year. Night in and night out, he battles for us and gives us a chance. Having him in the net, it's hard to put into words what it means from an emotional and confidence standpoint."

In overtime, Mikael Granlund pounced on a loose puck in the Anaheim zone and found Duchene on the right side. He quickly found Josi streaking down the left side and beat a diving Gibson on the short side.

Sissons scored the game's first goal at 10:04 of the second period. From the left circle, Duchene feathered a pass to Sissons in the low slot where he tipped the puck between Gibson's pads for his second goal of the season.

Terry spoiled Saros' shutout bid at 10:39 of the third with a wrist shot from the high slot that tipped off of the goaltender's glove and into the net. Terry leads the Ducks with 10 goals.

"I thought I had better shots than the one I scored on tonight," said Terry, who led the Ducks with five shots on goal.

After Nashville outshot the Ducks 31-18 through two periods, Anaheim stormed back in the third, outshooting the Predators 16-7.

Saros' best save came with 12:45 remaining in the second, when he stopped a two-man breakaway. Terry left a drop pass for Trevor Zegras, whose shot from the slot was turned away by Saros.

"He's the best breakaway goalie I've ever seen, but I've never seen him get scored on 2-on-0, even in practice," Duchene said of Saros. "It's insane."

Cleanup and restoration crews began work early Friday to get the building ready to host Tuesday night's game. The broken water main outside of Bridgestone Arena caused millions of gallons of water to flood the event level. Portions of the ice surface had to be repaired.

Nashville improved its record when leading after two periods this season to 8-1-1. The Predators have that impressive mark despite being outscored in third periods 23-16.

Anaheim has had the lead after two periods just once this season.

Predators: Visit the New Jersey Devils on Thursday to begin a three-game trip.