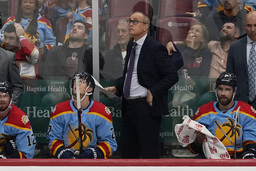 SUNRISE, Fla. (AP) Jordan Kyrou scored his second goal of the game at 1:08 of overtime to give the St. Louis Blues to a 5-4 victory over the Florida Panthers on Saturday night.

St. Louis overcame a three-goal deficit in the third period, tying it on Vladimir Tarasenko's goal with 3:49 left. Brandon Saad and Ryan O'Reilly also scored and Thomas Greiss made 33 saves.

"I think we just came in after the second, we're like, `Hey, let's not let this . affect us and just quit,'"' Kyrou said. "It was just a crazy comeback. . You just got to find a way right? You know, good teams find a way to win."

Florida, playing without captain Aleksander Barkov, outshot the Blues 16-1 through the first 13 minutes of the game.

St. Louis gave up three goals in the opening period of its loss to Tampa Bay on Saturday night and watched the Panthers match that. Saad scored off a rebound to get the Blues on the board. In the second, Lundell made it 4-1.

"Great comeback win. Guys really pulled it together," St. Louis coach Craig Berube said. "We didn't have the start we wanted for sure, but the second period we settled in a little bit more but still didn't play the right kind of hockey we needed to play to be successful, but we did in the third. So that's good on the guys."

O'Reilly cut into that lead when he fired an odd-angled shot from behind the goal cage that bounced off Knight and in at 8:16 of the third. Kyrou's wrist shot from the right circle pulled St. Louis within a goal with 6:13 left and Tarasenko tied it.

"You have to skate and you have to make plays. You can't sit on anything," Florida coach Paul Maurice said. "Maybe even to the 10-minute mark (of the third period) we were fine then they made a push and we did not handle it well. . When it got to 4-2, you could feel us back off and not be confident or direct with the puck. You can't play a tentative game."

The Panthers were without Barkov for the second game in just over a week with what coach Paul Maurice said was a non-COVID-19 illness.

Barkov missed a game against Dallas last week but played in the following three games. He missed practice Friday with Maurice saying it was due to residual effects from the illness.

Because the Panthers only have 20 players on their active roster due to salary cap constraints, the team played shorthanded against both the Stars and Blues.

Panthers: At Edmonton on Monday night.