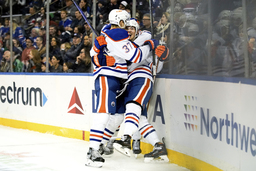 NEW YORK (AP) Leon Draisaitl scored on the power play with just over two minutes to play and the Edmonton Oilers rallied for four third-period goals to shock the New York Rangers 4-3 Saturday.

Jack Campbell made 20 saves, while defenseman Evan Bouchard scored twice and Dylan Holloway got his first NHL goal in the comeback.

Draisaitl's 12th goal of the season at 17:58 completed the rally by the Oilers, who lost the previous two games in the New York area this week to the Devils and Islanders.

"A really big win for us," Draisaitl said. "We have to build off of this."

"What we displayed was character,? Oilers coach Jay Woodcroft said. "The belief was there and we played the right way."

Lafreniere, Chris Krieder and Julien Gauther had scored to give the Rangers a 3-0 lead heading into the third. Defenseman Ryan Lindgren had two assists for the Rangers who fell to 4-3-4 at home.

"I thought we played a great two periods ... then we came out in the third period and got careless," Rangers coach Gerard Gallant said. "They get four goals in the third period for no reason other than us giving them opportunities - and two dumb penalties ... It's a team collapse. That can't happen."

The Rangers had two apparent goals nullified - one for offsides and another for goaltender's interference.

"We were positive that neither one of those was a fair goal and we were proven right," Woodcroft added.

The Oilers also fell 5-2 at Newark last Monday, then lost 3-0 to the Islanders on Wednesday during which they had a season-high 49 shots, went 0-for-5 on the power play and allowed a short-handed goal.

Lafreniere opened the scoring at 2:20 of the first, tapping a pass from Adam Fox past Campbell.

Artemi Panarin appeared to put the Rangers ahead 2-0 with a power-play goal midway through the first but the goal was rescinded after the play was ruled offsides after an Edmonton challenge.

The Rangers appeared to score at 14:32 when defenseman Braden Schneider's shot eluded Campbell. But officials ruled there was contact with Campbell in the crease and the goal was disallowed.

Kreider and Gauthier then scored 33 seconds apart to put the Rangers ahead 3-0 heading into the second intermission.

The Rangers appeared to have the game in hand on home ice but Bouchard spoiled Shesterkin's shutout bid at 4:40 of the third on the power-play before scoring again at 7:32, his first two goals this season.

"Once one went in, everything was going in," Bouchard said. "It was good for the team, a good character win. It's one we have to remember."

Holloway tied the contest at 10:21 before Draisaitl's heroics lifted Edmonton to the improbable victory.

"We got passive, on our heels,? Rangers captain Jacob Trouba said of his team's third-period collapse. "Right now nobody is in a good mood. We want to be a team that holds onto leads."

Panarin has gone 12 games without a goal - tying the longest drought of his career.

"We have to learn from this game and play with more stability for three periods," Panarin said.

NOTES: The Oilers have allowed 43 of their 75 goals in the past 11 contests . Edmonton scratched defenseman Ryan Murray and forwards Devin Shore and Kailer Yamamoto.. The Rangers scratched forward Vitali Kravtsov and defenseman Zac Jones . The teams meet again Feb. 17 in Edmonton.