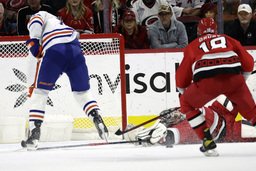 Svechnikov's other hat trick this season also came against Edmonton. His third goal this time came with 4:11 remaining, giving him 100 goals in 297 career games.

Brent Burns, Jordan Staal, Jordan Martinook and Jesper Fast also scored for the Hurricanes, who snapped a two-game skid and forged a season split with Edmonton. Teuvo Teravainen and Martin Necas each had two assists.

Connor McDavid had a goal and an assist and Zach Hyman scored for the Oilers, who lost for the fourth time in five games.

"He came in a tough spot, a high-powered team," Hurricanes coach Rod Brind'Amour said. "He made some huge saves there. That's the difference in the game for me."

Svechnikov continued his early success with 11 goals in 14 games. He's the first Carolina player in seven years with multiple hat tricks in the same season. It was timely after the Hurricanes were shut out a night earlier at Florida.

"He has been good all year," Brind'Amour said. "We need it. We have some key guys that aren't in our lineup who score goals. So we're counting on everyone else to chip in and he has been leading the charge."

Edmonton has given up five or more goals in three of its last four games, though this was the most allowed this season.

Svechnikov's first goal of the night came when his shot from the right side bounced in off the far post with 20 seconds to play in the first period.

Burns was set up by Martin Necas' pass on the power play at 5:58 of the second period to give Carolina a 2-0 lead.

Hyman put the Oilers on the board with a second-period power-play goal.

Svechnikov's second goal came off a pass from Necas. The puck skipped off Campbell's glove, giving the Carolina right winger his third multi-goal game of the season.

Staal's goal came on a power play in the final second of the second period.

Before any of the goals, Kochetkov stopped Dylan Holloway's attempt on a penalty shot before the midway mark of the first period.

Kochetkov was playing his first game of the season because Hurricanes goalie Frederik Andersen is out with a lower-body injury.

"He played great for us last year," Martinook said. "We know what he is."

With forward Evander Kane out for three to four months after a scary wrist cut from a skate blade Tuesday at Tampa Bay, the Oilers called up Mattias Janmark and Klim Kostin from Bakersfield of the AHL. Janmark made his season debut, while Kostin was a scratch.

Kane is expected to reunite with the Oilers on Friday in Miami and return home with the team as its four-game trip concludes Saturday.

Oilers: At Florida on Saturday.

Hurricanes: At Colorado on Saturday.