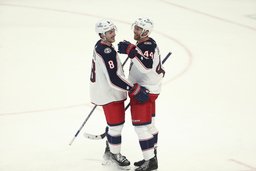 BUFFALO, N.Y. (AP) Jack Roslovic had two goals and an assist to lead the Columbus Blue Jackets past the Buffalo Sabres 7-4 on Monday night.

Roslovic and defenseman Vladislav Gavrikov each scored his first two goals of the season for Columbus. Max Domi added a goal and two assists, and Joonas Korpisalo made 29 saves fresh off a two-game West Coast trip to give the Blue Jackets their third victory in four games.

"I'm sure for Jack it's kind of a release a little bit," Columbus coach Brad Larsen said. "Goal scorers and offensive guys, when they have a night like that, you can tell they were feeling it right away. They got more ice time, they played really well tonight. That was a good line."

Tage Thompson scored twice for Buffalo and matched his career high for goals with eight - coming in his first 18 games. He had eight goals in 38 games last season.

Roslovic's first two goals, the second assisted by Domi, gave the Blue Jackets a 2-1 lead in the first period. Columbus made it 5-2 with a three-goal outburst in the opening 3:41 of the second.

Roslovic had an assist on Domi's goal, and Domi also assisted on Gavrikov's first of the season. Oliver Bjorkstrand and Domi scored within the first 55 seconds of the second, which broke a franchise record for the fastest two goals to start a period.

"I think our line tonight as a whole was great," Domi said. "Jack was unbelievable. It's great to see him get rewarded like that. He's been playing so hard and obviously the puck hasn't always gone his way this year."

Domi's goal came 31 seconds after Bjorkstrand's sixth of the season, breaking the previous Columbus mark of two goals in 1:18 at the start of a period. Gavrikov added an empty-netter with 44.3 seconds left, followed by a second empty-netter from Sean Kuraly with 9.2 seconds remaining.

Columbus chased Sabres starter Dustin Tokarski after he made eight saves on 12 shots in 20:55. Aaron Dell stopped 14 shots in relief a night after he took a heartbreaking 5-4 loss in New York when the Rangers scored the game-winner with 0.4 seconds left in the third period.

"We were down 5-2, we fought and scratched and clawed," Sabres coach Don Granato said. "It was great to see that effort, especially in a back-to-back. You're playing a team that's rested."

Zemgus Girgensons scored on the power play with a second left in the first period, and Dylan Cozens also had a goal for the Sabres. Cozens also assisted on Thompson's second goal that trimmed it to 5-4 midway through the second.

The Sabres had an opportunity with 31 seconds of 5-on-3 power-play time midway through the third, but Columbus held Buffalo to one shot on goal during that stretch.

"The penalty kill was outstanding, whether it's just the positional play, denying the zone, good sticks - (Korpisalo), too," Domi said. "I think everyone was doing their job on the PK tonight."

Sabres defenseman Henri Jokiharju came off injured reserve and played in his first game since he sustained a lower-body injury on opening night against Montreal. To make room on the roster, Buffalo placed goalie Craig Anderson on IR with an upper-body injury. Jokiharju replaced Will Butcher in the lineup.

Columbus forward Gregory Hofmann returned to the lineup after he was scratched for the previous game in Las Vegas on Saturday. Hofmann replaced forward Justin Danforth, who has one goal in three games with the Blue Jackets since being recalled from AHL Cleveland on Nov. 14.

Sabres: Host the Boston Bruins on Wednesday night in the second game of a three-game homestand.