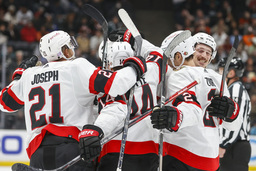 ANAHEIM, Calif. (AP) Derick Brassard and Mathieu Joseph each had a goal and two assists, and the Ottawa Senators beat the Anaheim Ducks 5-1 on Friday.

"We had a really good effort today," Tkachuk said. "Special teams came up big, PK was great tonight, and power play, you know, showed up when we needed to. So, overall, it was a really fun experience tonight."

Max Jones scored for Anaheim in the third period, and Anthony Stolarz made 28 saves. The Ducks followed their first regulation win of the season on Wednesday with an undisciplined effort, yielding eight power plays.

Tkachuk opened the scoring on the power play, tucking his one-timer under the crossbar from the slot with 3:36 remaining. Brassard then made it 2-0 with 1:41 to go.

"From then on, it just felt like we played a really solid game, really mature game, and just followed the game plan to a 'T.' So we have to build off that," Tkachuk said.

Ottawa needed just 14 seconds on the power play to take a 3-0 lead midway through the second. Stutzle got his eighth goal of the season on a powerful wrist shot from the high slot.

Joseph got in on the fun with Ottawa's third power-play goal on a chip over Stolarz while falling down at 6:49 of the third, but coach D.J. Smith was even more excited by the defensive performance. The Senators had allowed at least four goals 10 times during a 2-10-1 slump coming into the matinee.

Jones ruined what would have been Talbot's fourth career shutout against the Ducks by scoring with 2:50 remaining. While Talbot could not complete his first shutout of the season, he did run his record against the Ducks to 15-7-2 in 24 career games.

"Talbot was good wire to wire," Smith said. "It's unfortunate the shutout's not his. He certainly deserved it."

Defenseman Thomas Chabot had the secondary assist on Tkachuk's goal in his return after missing five games because of a concussion. Chabot was hurt when he was checked into the boards from behind by Philadelphia's Travis Konecny on Nov. 12.

Paired with Zub, who picked up the Senators' fourth goal on a a shot from the left circle through traffic with 5:06 left in the second, it was the first time in nearly a month Ottawa had its top defensemen on the ice together.

"`Chabby has been a top defenseman in this league for, I don't know how many years now, ever since I've been here. So to get him back, it definitely created a spark and energy for us," Tkachuk said.

Senators: At the Los Angeles Kings on Sunday night.