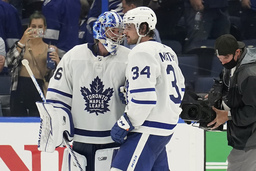 By BY FRED GOODALL

Not when the Tampa Bay Lightning began cutting into a three-goal deficit, and especially not when the two-time defending Stanley Cup champions made a late push to really put some heat on the Toronto Maple Leafs.

Campbell had 32 saves, including three from point-blank range to protect the lead on a late power play, and the Maple Leafs beat the Lightning 5-2 Friday night in Game 3 of the first-round playoff series between the Atlantic Division rivals.

"Coming into this rink, it's a tough rink. Their fans are into it and their team is always buzzing. We did a great job of having a strong start tonight, especially after Game 2," Campbell said. "The sacrifices every single guy was making in front of me tonight, blocking shots, getting into lanes and making it tough to get things to the net, was huge."

No team has been as resilient in the postseason as Tampa Bay in winning back-to-back titles, however the Maple Leafs feel they've made some strides in responding to adversity since squandering a 3-1 lead to Montreal in the opening round of last year's playoffs.

Game 4 is Sunday night in Tampa.

"We can't wait for them to go up by a couple goals for us to kind of flip the switch," Colton said. "The second half of the game, I think we dominated them. ... I think that just comes down to preparation. We have to come to the rink with a little bit more urgency."

The Lightning are 16-0 in games following a playoff loss over the last three postseasons, including a 5-3 win in Game 2 of this series.

The defending champions were unable to build on the momentum of that victory, though, yielding goals to Rielly on the power play and Blackwell of a 3-on-1 in the opening 10 minutes. A turnover led to Kampf's unassisted goal that made it 3-0 early in the second period.

"We're in the box a lot so that kills the flow of the game, kills some momentum," Lightning captain Steven Stamkos said.

"Guys are grinding, working extremely hard. You can't take five penalties in the first half of the game, it's taxing," Stamkos added. "Give our penalty killers a ton of credit give our goaltender a ton of credit. We fought back hard, but it's tough to go in a three zip hole and expect to come back come playoff time."

"Our penalty killers are amazing in front of me, and they've been doing well all season," Campbell said of Stamkos' shot. "Sometimes the quality of players that Tampa has, they're going to make great plays. They made a great play there and fortunately it stayed out."

Vasilevskiy was pulled for an extra attacker with 2:20 left. Mikheyev put the Maple Leafs up 4-2 at 18:20 of the period, and his second empty-netter came with 5 seconds remaining.

Toronto, which hasn't won a playoff series since 2004, won the opening game of the series at home 5-0.

"Getting out to the lead early really benefited us. Soup made some unbelievable saves, " Maple Leafs star Auston Matthews said. "All throughout our lineup guys stepped up when they had to and made plays when they needed to be made."