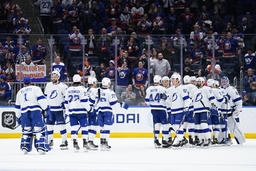 TORONTO (AP) Victor Hedman had a goal and three assists for his first four-point playoff game and the Tampa Bay Lightning beat the Toronto Maple Leafs 5-3 on Wednesday night in Game 2 to even the first-round series.

"I don't know how far teams go when their big guys aren't going," Lightning coach Jon Cooper said. "You need them, especially at times when your back's against the wall. Can't say our backs were against the wall, it was one game, but we needed tonight. They stepped up and it started with our goaltender. He was outstanding."

Mitch Marner had a goal and an assist for Toronto, Michael Bunting and Alexander Kerfoot also scored and Jack Campbell made 29 saves. Auston Matthews had two assists.

"Too many penalties," Marner said. They've got a lot of guys that can make plays. We've got to stay out of the box."

Game 3 is Friday night in Florida.

The Lightning opened the scoring on a power play with 1.4 seconds left in the first period. After making a big stop on Point from the slot, Campbell was beaten by Hedman from in tight on a broken play where the puck popped out to the defenseman on the goaltender's doorstep.

"I was looking for (Kucherov)," Hedman said. "I don't know if he got tangled up or not, but I was waiting to pass it. That was a big goal."

Vasilevskiy made a glove save on Timothy Liljegren early in the second, then Hedman sent Perry in alone on a breakaway less than a minute later to make it 2-0 at 2:21.

Bunting cut it to 2-1 at 7:47. He returned to Toronto's top line alongside Matthews and Marner after missing the last four games of the regular season and the series opener with an undisclosed injury.

"After we made it 2-1, I don't think we grabbed the game as well as they did," Maple Leafs captain John Tavares said. "Just being short-handed as much as we were, especially when we got down, it was hard to really get our game going."

Marner got one back for Toronto with 8:07 left and Kerfoot scored the Maple Leafs' second short-handed goal of the series with 4:17.

"The refs set the standard early," Toronto coach Sheldon Keefe said. "They took one (player) after the whistle, which made it pretty clear that they were going to call it like that. We didn't do a good job of reading that and responding to that. We've got to be more responsible."