Huberdeau, Panthers rally from 4 down, beat Leafs 7-6 in OT 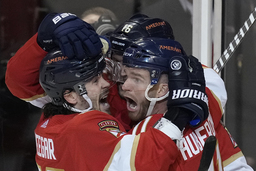 The Atlantic Division-leading Panthers trailed 5-1 midway through the second period before roaring back. Sam Reinhart scored twice, Aleksander Barkov had a goal and three assists, Claude Giroux got his first goal with Florida and Radko Gudas also scored.

Huberdeau took a pass from Barkov in overtime and poked it past Jack Campbell for his 102nd point this season. The Panthers improved to 49-15-6, setting a franchise record with their 104th point.

"A lot of milestones, but it's cool doing that when we win," Huberdeau said. "It's been a fun year. It's been fun, but we haven't done anything in the playoffs."

Each team turned to its backup goalie as the sides combined for 84 shots on goal. Sergei Bobrovsky allowed four goals on 14 shots for Florida before Spencer Knight relieved in the second period and stopped 19 of 21 attempts.

The Panthers came back from a four-goal deficit for the second consecutive game.

"It was a frenzied game," interim coach Andrew Brunette said. "I'm sure their coach is scratching his head a little bit, too. It was one of those games, it's fun for the fans, probably fun for the players in a lot of ways, but not as much fun for us."

Erik Kallgren turned away 20 of 23 for Toronto before taking a puck off his mask late in the second. Campbell replaced him and stopped 22 shots.

Toronto tied a franchise record last achieved in 1983-84 by scoring five or more goals for the sixth straight game.

"We go from having a chance on a breakaway to go up 6-1 to taking a too-many-men-on ice penalty right after. That starts the snowball," coach Sheldon Keefe said. "We had pretty terrible penalty killing. I'm not going to focus on all that stuff, I'm going to focus on the fact we played a good hockey game today."

Huberdeau also had a tying power-play goal 2:45 into the third, making it 5-all, after Reinhart, Gudas and Giroux scored in the second. It was Giroux's first goal since being acquired from Philadelphia on March 19.

The Maple Leafs scored three goals in 2:04 of the second to chase Bobrovsky from the game. Marner scored short-handed, then on a power play, before Blackwell stretched the lead to 4-1. Muzzin added on with 11:20 left in the second period.

Marner's two goals came 37 seconds apart, the shortest span between a power-play and a short-handed goal in NHL history.

"Disappointed to lose that game," Maple Leafs center Jason Spezza said. "You don't want wild swings in a game where we had control."

Bobrovsky has been pulled from two straight starts since a 37-save shutout March 31 against Chicago.

NOTES: Huberdeau became the first Quebec-born skater to record a 100-point season since Tampa Bay teammates Vincent Lecavalier (108) and Martin St. Louis (102) both accomplished the feat in 2006-07. ... The game was a matchup of two of the teams with the NHL's four best records this season, Florida being No. 2 to start the day and Toronto No. 4. ... Tuesday started a stretch where Florida plays seven out of 10 games at home. The Panthers then close the regular season on a three-game trip.