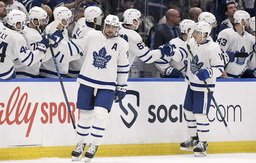 TAMPA, Fla (AP) Auston Matthews had three goals to tie the franchise single-season record for goals with 54, and the Toronto Maple Leafs beat the Tampa Bay Lightning 6-2 on Monday night.

Matthews, who also had an assist and extended his goal streak to six games. completed his seventh career hat trick - and fourth this season - from the slot to give Toronto a 5-2 lead at 7:08 of the third. The center equaled Rick Vaive's mark set in 1981-82.

"It's humbling, it means a lot," Matthews said.

Mitchell Marner had a goal and two assists, giving him 22 points (six goals, 16 assists) during a 10-game point streak. He also recorded his sixth straight multi-point game as the Maple Leafs took a two-point lead over Tampa Bay and Boston for second place in the Atlantic Division. Marner scored his goal at 11:24 of the third.

"This is a big game for us, obviously," Matthews, said. "They're a really good team, they know how to win, so it was an important game for us this point of the season. All these points count and really matter. I think it's just a really complete game by everybody."

Pierre Engvall and Alexander Kerfoot had the other Toronto goals. Jack Campbell had 32 saves.

"We didn't manage our game," Lightning coach Jon Cooper said. "We were way, way, too easy to play against tonight. It was like a light practice for them. It's too bad because you want to see where you're at. I thought we kind of turned the corner a bit but clearly we haven't."

Matthews put Toronto up 2-1 with a wrist shot from the left circle 1:46 into the second.

"It's fun to watch him," Campbell said of Matthews. "To see him get the results on the ice like he's been doing, it's just incredible. It's just crazy. It's amazing."

After Rutta scored four minutes later, the Maple Leafs took a 4-2 advantage on Matthews' low-slot redirection with 10:03 left in the second and Kerfoot's in-close goal 2:28 later.

Engvall opened the scoring on Toronto's first shot 1:59 into the game.

Kucherov tied it at 1 from the left circle right off a faceoff win by Steven Stamkos at 6:24 of the first.

Matthews (253) moved past Bob Pulford (251) into ninth place on Toronto's all-time goals list. He has a point in each of his last 13 games. ... Marner joined Matthews (seven games, 2018-19) as the only Toronto players to have streaks of six or more multi-point games. ... Kucherov has two goals and 10 points during a five-game point streak.

Lightning: At Washington on Wednesday night.