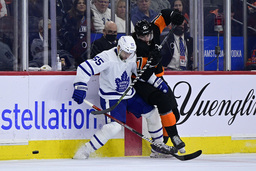 PHILADELPHIA (AP) Auston Matthews scored his NHL-leading 51st goal, Morgan Rielly had a goal and two assists, and the Toronto Maple Leafs won their fourth straight with a 6-3 victory over the Philadelphia Flyers on Saturday night.

John Tavares, Wayne Simmonds, Timothy Liljegren and Pierre Engvall also scored for the Maple Leafs, who have netted 24 goals during their streak.

Ivan Provorov had two goals and an assist and Kevin Hayes also scored for the Flyers, who have lost five of six. Philadelphia entered tied for last with New Jersey in the Metropolitan Division.

"Not a very good hockey game by us," Toronto coach Sheldon Keefe said. "Maybe we showed up for an easy game and they didn't give it to us. So we looked bad for a while."

Matthews put Toronto ahead 3-2 with 12:19 remaining to pull within four goals of passing Rick Vaive for the club's all-time single-season goals record. Vaive netted 54 in the 1981-82 season.

"Sometimes you have to grind these games out," Matthews said.

Mitchell Marner got Flyers goalie Carter Hart to commit to playing the shot, and then quickly skated around the net and passed in front to Matthews, who fired into the vacated net.

"I just tried to get in a spot where he could give it to me and he made a beautiful pass," said Matthews, who has a two-goal league lead over Edmonton Oiler Leon Draisaitl (the Oilers didn't play Saturday).

Matthews' tally began a frenetic stretch of five goals in the span of about eight minutes. Engvall's short-handed goal gave the Leafs a two-goal lead with 8:17 remaining before Provorov's second of the night on a long slap shot pulled the Flyers within 4-3 with 7:37 left. Rielly all but iced the game with a goal from a sharp angle with 6:13 to play.

The Maple Leafs opened a four-game trip by improving to 19-12-3 away from Toronto.

Yandle, 35, started his streak on March 26, 2009, with Phoenix. He passed retired center Doug Jarvis for the mark of 965 games on Jan. 25 against the Islanders. Yandle was a healthy scratch.

"We're at the point in the season where as an organization it's important we get some young players in," Yeo said before the game. "We have to have an eye on the future and what's coming down the road. We have to give some new guys an opportunity."

Rookie defenseman Ronnie Attard made his NHL debut for Philadelphia.

Yandle has one goal and 15 assists in 67 games.

"It's kind of been one of those things toward the end of the year when you're signing young guys and getting free agents out of college, they're going to give them a chance to play," Yandle said before the game. "It's tough to have a bad day in the NHL. But getting the news you're not playing is not what you want to hear."

Maple Leafs: D Ilya Lyubushkin returned to the lineup after missing Thursday's 7-3 home win over Winnipeg with an upper body injury. . G Jack Campbell was back in net for the first time since March 8 due to a rib injury. He made 29 saves.

Flyers: Hart also returned to the net after sitting for two games with an undisclosed injury and stopped 22 shots. . C Scott Laughton missed his 11th straight contest due to a concussion suffered on March 10. Laughton has been cleared to resume skating. . C Nate Thompson played for the first time since Nov. 26 due to shoulder surgery.