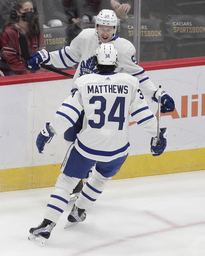 Matthews scored Toronto's sixth goal of the game into an empty net with 2:06 left in regulation. He moved past Leon Draisaitl (49 goals) of idle Edmonton for the league goal lead and became the first Maple Leafs player to reach the milestone since Dave Andreychuk scored 53 in 1993-94.

"I don't know if I ever really envisioned it being an empty-netter goal, but I'll take it," Matthews said. "I had some good chances tonight, just didn't go in.

"Fortunately that last one did."

William Nylander had two power-play goals and an assist and Ilya Mikheyev scored short-handed and had a three-point game. Mark Giordano added a goal and an assist and John Tavares and Timothy Liljegren also scored Toronto, which got 20 saves from Erik Kallgren. Mitch Marner added three assists.

"We need to win games," Ehlers said after Winnipeg blew an early 2-0 lead. "Besides playoffs, this is the toughest time of the year."

"Really special to be able to do it here in front of all the fans," said Matthews, whose team hits the road for four straight starting Saturday in Philadelphia. "The energy, the atmosphere and all that goes into it just makes it much more fun."

Kallgren got the start with Petr Mrazek likely to be out at least six weeks with his third groin injury of the season suffered in Tuesday's 6-4 victory over Boston. No. 1 goalie Jack Campbell (rib ailment) has been cleared medically to resume action for the first time since March 8, but didn't dress.

Trailing 2-1 after the first period, Toronto tied things up 1:58 into the second when Nylander banged a Matthews' rebound off the end boards past Comrie for his 25th goal of the season.

Ehlers scored his 21st - and seventh in the last 10 games - on a Winnipeg power play at 3:45 past a screened Kallgren.

The Leafs got even at 3-all 23 seconds later when Tavares swatted his 23rd past Comrie, who got the start in place of Connor Hellebuyck in the second of a back-to-back.

Nylander poked in his second of the game and 26th of the year on another man advantage at 8:40 as the Leafs' top-ranked power play connected for Toronto's first lead.

Mikheyev made it 5-3 when took a pass from Pierre Engvall with the Leafs killing a penalty, settled the puck on his stick and scored his 15th at 13:55 for his team's league-leading 11th short-handed goal.

Winnipeg opened the scoring at 3:19 of the first when Wheeler stepped around Giordano before scoring his 12th.

The Jets made it 2-0 at 7:45 when Stastny took a rebound off the end boards and fooled Kallgren on a wraparound for his 18th.

Giordano made up for his earlier mistake on the Wheeler goal when his attempted pass pinged off two defenders for his seventh of the campaign - and first as a Leaf at 15:03.

Matthews was twice robbed of 50 goals by COVID-19. He found the back of the net 47 times in 70 games in 2019-20 before the pandemic abruptly ended the regular season before putting up 41 in 52 contests over the course the 2020-21 coronavirus-shortened campaign to win his first Maurice (Rocket) Richard Trophy as the NHL's top goal scorer.

Thursday was Matthews' 62nd game of the season - he missed three because of injury and two via suspension - while Draisaitl has suited up for each of Edmonton's 68 contests.

Toronto: At Philadelphia Flyers on Saturday in the start of a four-game trip.