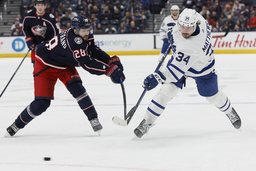 Matthews and linemates Mitch Marner and Michael Bunting each had a goal and an assist, and llya Mikheyev and Alexander Kerfoot also scored as Toronto snapped a two-game losing streak. T.J. Brodie had two assists.

The Maple Leafs jumped out to a 3-0 lead in a dominant first period. The Blue Jackets had tied it by early in the third period, but couldn't get a go-ahead tally.

"I think just the start that we had was really positive, (then) letting them back in the game, but I thought just our bench and our team as a whole just stayed poised and confident," Matthews said. "And we just kept playing and scored a couple big goals to give ourselves a lead."

Elvis Merzlikins, starting his third game in four days for Columbus, made 28 saves, but it wasn't enough to prevent a third straight loss for the Blue Jackets, who dropped a back-to-back over the weekend.

Mikheyev beat Merzlikins 8:06 into the game before Marner scored off a rebound from Bunting's long shot with 5:59 left in the first. Matthews got his league-leading 40th goal about three minutes later with a wraparound shot to the far post.

"Our whole team was really good in the first, which makes Auston's line and Auston himself that much more dangerous," Toronto coach Sheldon Keefe said. "Because shift over shift, we're just carrying momentum and really wearing down the opponent."

The Blue Jackets closed it to 3-1 early in the second when a long shot by Domi bounced in off Kuraly. Bjorkstrand cut the lead to one with his 20th goal late in the second during a 4-on-4.

The Jackets tied it early in the third when Roslovic tapped in a long pass from Domi on a power play.

But the Leafs got back to work, with Kerfoot banging in a goal off the far post and Bunting shoveling one in over Merzlikin's skate in traffic with 8:39 left in the game.

Laine made it a one-goal game again with 48 seconds left, but the Blue Jackets, with an empty net, just ran out of time.

"I know where we're at here. We need the two points, but it was a step for us tonight against a really good team to stay in it and work ourselves back into the game," Columbus coach Brad Larsen said.

A half hour before the puck dropped, the Blue Jackets announced that masks would no longer be required for fans at Nationwide Arena. That followed the decision by Columbus City Council earlier Monday to lift the city-wide mask mandate.

Mrazek, playing in just his 15th games this season, started for Jack Campbell, who made 23 saves in Toronto's 6-4 loss to Vancouver on Saturday. ... Blue Jackets G Joonas Korpisalo was activated from injured reserve Monday after missing nine games with a lower-body injury. J-F Berube was sent back down to the AHL team in Cleveland. ... D Jake Bean returned for Columbus after missing 14 games with a lower-body injury. Gavin Bayreuther was scratched to make room. ... Bjorkstrand has points in his last five games and in 11 of the last 14.