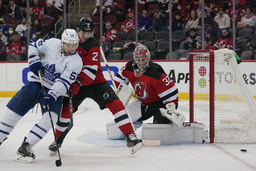 NEWARK, N.J. (AP) The Devils let one setback against the Maple Leafs beat them twice.

After blowing an early three-goal lead and collapsing in the third period at Toronto on Monday, New Jersey carried that 6-4 loss into the game less than 24 hours later.

Mitchell Marner had two goals and an assist and Jack Campbell had 31 saves for Toronto, which routed New Jersey 7-1 on Tuesday night.

"That was a heartbreaking loss last night. I do think that it carried over into today. Still, no excuses," interim coach Alain Nasreddine, who was filling in for Lindy Ruff, who was grieving his late father. Nasreddine added: "Today wasn't pretty."

The Maple Leafs struck first at 2:13 into the first period after Jon Gillies fumbled the puck trying at the side of his net. Pierre Engvall corralled it at the back of the net and found Jason Spezza for the one-timer. It was Spezza's ninth of the season.

The Maple Leafs added two more later in the first in a span of 26 seconds. Auston Matthews scored his 29th goal at 8:38, and David Kampf scored at 9:04 to make it 3-0 into the first period and notch his fifth goal of the season. ??Mitchell Marner made it 4-0 Toronto with about 4 1/2 minutes left in the period.

"Our starts maybe haven't been as good as we wanted to in the last couple games or so and especially last night," Matthews said. "I think we just really made a good effort on just starting on time and a big goal from Spezza line there to get us started and then I think we just rolled through from there. ... (Campbell) came up big when he had to and we played with the puck a lot tonight, and challenging the net and it's just a test of our resiliency and just making sure that we get the job done for a full 60 minutes."

Michael Bunting and Engvall ran up the score more in the second period.

Backup Jon Gillies was in net for the Devils, giving up six goals on 28 shots before being pulled to start the third period. Akira Schmid came off the bench and had seven saves.

For the Devils, Jack Hughes scored a breakaway goal, his 12th of the season, 3:31 into the third period. But Marner responded about two minutes later.

Going into the All-Star break, the Devils have lost six in a row and nine of their last 10 games. The Leafs have won five in a row.

"We played a great third period last night and then didn't play well. Tonight we just didn't play well from the start ... so we're going to have to take this break to regroup and come back and be ready to play," Devils defenseman Damon Severson said. "We've shown we can play with these top teams when we're on, but these last five periods we haven't been on."

Devils: At Ottawa on Monday.