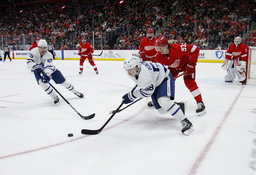 Mitch Marner scored a power-play goal with 1:14 left and John Tavares, who assisted on Sandin's goal, made it 7-4 with 11 seconds to go. Pierre Engvall also scored for Toronto, which won its second consecutive game.

"We knew that if we got the first goal of the third period, we had a good chance of winning," Bunting said. "We had our chances. They just weren't going in. Fortunately, they started going in in the third."

"I felt confident we could score two goals," Toronto coach Sheldon Keefe said. "Our best people made some big-time plays and we put pressure on Detroit. It's a great win for us. Not a great game, but a great win."

Dylan Larkin scored twice and added an assist for Detroit. Vladislav Namestnikov and Tyler Bertuzzi each had a goal for the Red Wings, who led 4-2 after two periods. Robby Fabbri and Moritz Seider each had two assists.

The Red Wings broke a 1-all tie after the first period with goals by Namestikov and Bertuzzi less than a minute apart early in the second.

"We gave up some opportunities we didn't need to in the second period," Detroit coach Jeff Blashill said. "Then in the third, they had all the momentum and we didn't have enough pushback. There weren't enough shifts where we made them defend, and then obviously the third our D-zone coverage was no good."

NOTES: Blashill coached his 500th game with the Red Wings, becoming the fifth Detroit coach to reach the milestone. ... Alex Nedeljkovic, who stopped 30 shots, started in goal for Detroit for the eighth time in nine games. ... Nedeljkovic and Mrazek both played for Carolina last season.