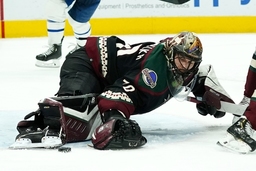 Vejmelka stopped 45 shots to help the Arizona Coyotes beat the Toronto Maple Leafs 2-1 Wednesday night for just their eighth win of the season.

"It's always better for a goalie to face so many shots," the rookie goalie said. "It's better than to have three, four shots for a period. ... I felt really good. My teammates helped me and it was a big game for us today."

Ryan Dzingel, playing for the first time since Dec. 10, scored twice to give him four goals in 17 games this season to help the Coyotes escape last place overall in the NHL with 19 points - one ahead of Montreal.

Arizona won without coach Andre Tourigny and defensemen Jakob Chychrun and Anton Stralman - all of whom were sidelined in COVID-19 protocols. Also out was goaltender Scott Wedgewood, who shares time with Vejmelka.

Auston Mathews scored his 24th goal of the season for Toronto. With his parents watching from the stands, Matthews - who grew up in nearby Scottsdale - set a Toronto franchise record by scoring a goal in his ninth consecutive road game. He had been tied with Babe Dye, Frank Mahovlich and Daniel Marois.

Matthews' goal came 14 seconds into the third period, assisted by Michael Bunting and Jake Muzzin. He beat Vejmelka above the left shoulder and the Maple Leafs seemed poised to come back to win.

But with 7:36 remaining, Dzingel got his second of the night on a feed from Nick Schmaltz, beating Petr Mrazek.

Acting coach Phil Housley, whose regular job as an assistant includes running the defense, liked what he saw from his younger-than-usual squad.

"We had a young (defensive) core tonight, it was a great experience for them," he said. "(The Leafs are) gonna get chances, they're a very good offensive team. I like the way we were opportunistic tonight, we scored first which was really important for our confidence, and our special teams did a good job."

Mrazek was playing in his second game since November and his fourth of the season. He missed 20 games with a groin injury. He faced 18 shots.

"I thought the guys did a good job of making his night somewhat easy. We needed one more big save but goalies can't get wins when you only score one goal," Maple Leafs coach Sheldon Keefe said.

The Maple Leafs were playing their second game in two nights, having won in overtime Tuesday in Las Vegas.

With the COVID-19 breakout, Arizona recalled defensemen Victor Soderstrom and Vladislav Kolyachonok and goalie Iva Prosvetov to the taxi squad. All three callups were in the lineup Wednesday night.

The Maple Leafs were still without forwards Pierre Engvall and Mitch Marner, also in the health and safety protocols.

Maple Leafs: Toronto has only been shut out once this season, 2-0 on Nov. 20 by Pittsburgh.

Coyotes: Kolyachonok made his NHL debut Wednesday, playing 12 minutes and leading Arizona with seven hits. The 20-year-old native of Belarus was a second-round pick of Florida in the 2019 draft. ... The Coyotes have won all three games they have led after two periods this season.

Coyotes: At Colorado on Friday night.