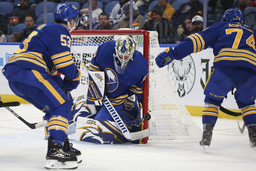 Despite allowing the Buffalo Sabres to score twice in 59 seconds to tie the game midway through the third period, Woll won in his NHL debut after Rielly scored with 12 seconds left to secure a 5-4 win on Saturday night.

"To be honest, it was probably the calmest I felt the whole game," said the 23-year-old said once the Sabres tied the game on Rasmus Dahlin's goal with 8:14 remaining. "There's nothing to win or lose, it was just going. It's obviously tough to go in and it can be a stressful environment but I tried my to just really stay in the moment."

With the Maple Leafs' forecheck hemming the Sabres in their own zone, Rielly came to the rescue by blasting a rising shot from just inside the blue line. The puck sailed through a crowd, hit the crossbar and had enough backspin to trickle inside the right post.

In scoring his first goal of the season, Rielly was happy to help deliver a win for Woll, who stopped 23 shots.

"Obviously there's areas of our game that we'd like to clean up," Rielly said. "But the fact that he gets to walk out of here with a win and a game puck and everything like that is awesome and he deserves it. There's plenty more where that came from."

Woll started with Jack Campbell getting a rest following a 30-save outing in a 2-1 overtime win over Calgary on Friday night. Starter Petr Mrazek is sidelined by a groin injury.

His debut came in the same arena the Maple Leafs selected Woll in the third round of the 2016 draft. It's also where the player from the St. Louis, Missouri, area won a bronze medal representing the United States at the 2018 world junior championships.

Jeff Skinner scored twice and added an assist for Buffalo, which dropped to 1-5-1 in its past seven.

Coach Don Granato was pleased with how his young team battled to tie the game, but was disappointed in a miscue which led to the decisive goal.

Defenseman Mark Pysyk hurried a pass up the left boards, where the puck was picked off by Alexander Kerfoot, who then fed Rielly.

"We had time to make a play. We didn't," Granato said. "There was a mistake and it happens."

The game featured several surges, with Toronto building a 3-1 lead on goals by Kase and Bunting scored 70 seconds apart in the second period, followed by Buffalo's response in the third.

"I would imagine it was an exciting game to watch for either their fan base because of that," Granato said. "But I don't know that it was that exciting to coach I guess.

Tage Thompson also scored for Buffalo in a matchup of two teams playing on consecutive nights and starting third-string goalies.

Aaron Dell stopped 21 shots in his Sabres debut after Dustin Tokarski stopped 33 shots in a 3-2 win over Edmonton on Friday night with Craig Anderson sidelined by an upper body injury. Signed as an offseason free agent, Dell opened in the AHL. He went 1-5 in six games with New Jersey last season, with the win coming in Buffalo on April 8.

The long-time, cross-border rivals resumed their series -- paused by the coronavirus pandemic -- in meeting for the first time since the Sabres' 5-2 win at Buffalo on Feb. 16, 2020.

"I haven't missed them," Granato said with a smile of how the Maple Leafs' arrival in Buffalo usually brings a large number of blue-and-white clad fans.

There was one difference with only a few Maple Leafs jerseys spotted in the crowd. In the pre-pandemic days, Leafs fans would make up nearly half the crowd in Buffalo. Though the borders are open, all travelers are required to show a negative COVID-19 test -- which can cost up to $200 each -- taken within 72 hours to enter Canada.

Maple Leafs: Face the Nashville Predators on Tuesday in the opener of a three-game homestand.

Sabres: At the Pittsburgh Penguins on Tuesday.