Big series in A-T-L: Mets vs Braves with NL East on the line 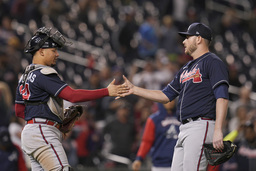 ATLANTA (AP) Two months into the season, it looked like the New York Mets were headed for an NL East runaway.

Not so fast, said the reigning World Series champions.

Now, they're a mere game behind the Mets heading into the biggest series of the year, a three-game set in the A-T-L on the final weekend of the regular season.

"It's gonna be fun," Braves manager Brian Snitker said. "That's kind of why you play."

This isn't quite like the classic pennant races of the pre-wild card era, when a team had to win its league or division to make the postseason. The Mets and Braves have both locked up playoff berths.

But every other division title has been clinched with a week to go, leaving the NL East as a most enticing outlier. And winning the division does come with a major perk.

The NL East champion gets a first-round bye. The team that winds up second will have to host a best-of-three series, most likely against the San Diego Padres.

"We know how good (the Braves) are and we've got an opportunity just like they do," Mets manager Buck Showalter said. "It's great for baseball and it's good for our sport that we all love."

The free-spending Mets, bolstered by a dynamic rotation and sluggers Pete Alonso and Francisco Lindor, are headed to the postseason for the first time since 2016.

Their biggest goal has been met.

Still, considering they've been in first place all but a couple of days this season, it would be a major downer if the Mets fail to snap Atlanta's run of four straight NL East titles.

Looking for more punch at the plate, New York is calling up 20-year-old Francisco Alvarez - baseball's top-rated prospect - ahead of Friday's opener.

"It's an important series and it's one where everyone is going to play hard," Mets third baseman Eduardo Escobar said through a translator.

Early on, it didn't look like much of a race.

Since then, Atlanta has matched the Los Angeles Dodgers as the hottest team in baseball with a 74-32 mark, getting huge contributions from a pair of rookies.

Michael Harris II was called up from Double-A to join the lineup on May 28, largely with the idea that he would bolster the team's defense in center field.

Turns out, the 21-year-old is much more than a glove man. Harris is hitting .305 with 19 homers, 64 RBIs and 20 stolen bases, making him the favorite for NL rookie of the year and already earning him a long-term deal.

If Harris is the best first-year player in the league, he's not far ahead of teammate Spencer Strider.

The hard-throwing right-hander with the bushy mustache began the year in the bullpen before making his first career start on May 30.

Unfortunately for the Braves, Strider won't be available for this series. He's out for the rest of the regular season with an oblique injury, though Atlanta is hopeful of getting him back for the playoffs.

With Hurricane Ian barreling up the East Coast, the Mets proposed shifting the series opener to Thursday - an off day for both teams. The Braves declined, having played 13 straight days.

By Thursday morning, the forecast called for only a slight chance of showers over the weekend.

The Braves have been chasing the Mets all summer, finally catching them on Sept. 6. But this one has been a nail-biter for a while, the margin no more than three games for more than a month.

New York leads the season series 9-7, which means the Mets can clinch the potentially important tiebreaker with one win in Atlanta.

The Mets won four of five when the teams met in New York the first week of August, which many thought would finish off Atlanta's division hopes.

But the Braves are 32-13 since then, feasting on below-.500 teams with a 21-5 mark. New York, meanwhile, opened the door by getting swept at home by the lowly Cubs, though the Mets have bounced back to win nine of their last 12, including a 10-inning win over the Marlins on Wednesday in which they rallied from a four-run deficit.

The Braves lost in extra innings at Washington, dropping a game behind New York.

That's OK, said Snitker, who pointed out that his team has played "a lot of big games, long years, high-pressure games. These guys have gotten a whole bunch of them under under their belt. I don't think there's a whole lot that's gonna shake them."

This was supposed to be final three games of the regular season, but the lockout forced an extension of the schedule. The Braves will travel to Miami for three games against the Marlins next week, while New York closes out at home with three against the Nationals.

No one is thinking about those games.

It's all about this series.