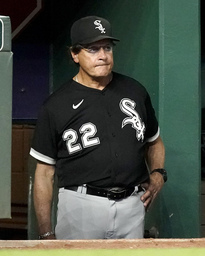 CHICAGO (AP) White Sox manager Tony La Russa got a kick out of the idea that a screaming spectator convinced him to insert a pinch-runner during a winning rally this week.

The Hall of Fame skipper, the second-winningest manager in big league history, insisted Tuesday he had no idea a fan near the dugout was yelling for him to send Adam Engel to run for Eloy Jimenez the previous night against Houston.

Jimenez had just hit a tying, two-run double during a four-run eighth inning that propelled Chicago to a 4-2 victory.

"Make his day, tell him I heard him," La Russa said, smiling.

La Russa said he and his staff were trying to decide: Do they keep Jimenez in for a potential at-bat later with the game tied in the eighth? Or do they have Engel run for him?

In a video posted on Twitter, a fan named Noah Weinstein can be seen screaming "Hey Tony! Hey Tony! Get Engel in there" from a spot near the front row on the home plate side of the third base dugout as Jose Abreu stepped into the box. While that was going on, La Russa motioned toward plate umpire Chris Conroy to call time and took a few steps onto the field.

Engel came in to run. The White Sox loaded the bases before Yoan Moncada lined a two-run single.

Weinstein, a self-described "diehard fan" who was at the game with his son, told WSCR-AM he walked down the aisle from his seat in about the 10th row after Jimenez's double. He said he wasn't sure La Russa heard him. But he thought he might have convinced the manager to have Engel run.

"He never looked at me. But something obviously happened, and he, as you saw, just sprung into action," Weinstein said.

La Russa has been a lightning rod for White Sox fans since he was hired for a second stint in Chicago prior to last season. The White Sox won the AL Central in 2021 but have been one of baseball's biggest disappointments this year. Chicago was 60-56 and trailed first-place Cleveland by two games following Monday's win.