Franco, Rays both get what they want in $182 million deal 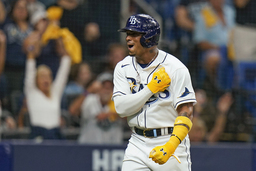 ST. PETERSBURG, Fla. (AP) Wander Franco and the Tampa Bay Rays both got what they wanted in the shortstop's $182 million, 11-year deal that includes a club option for the 2033 season.

The 20-year-old Franco got financial security for his family and Tampa Bay locked up a homegrown budding star long term.

The Rays introduced Franco on Monday, two days after he signed the deal that could be worth up to $223 million if the club option is exercised and incentives are reached.

"I can just help my family and be happy with this opportunity," Franco said through an interpreter.

Tampa Bay won the AL East in 2021 but was eliminated by Boston in the ALDS. The low-budget Rays reached the World Series in 2008 and 2020 but lost both times.

"The one thing I want to do is win a championship," Franco said.

Franco made his major league debut June 22 and hit a three-run homer. He batted .288 with 18 doubles, five triples, seven homers and 39 RBIs in 70 games, and finished third in the American League Rookie of the Year voting.

"We've got somebody we know we can trust, and who is going to be there for his teammates, and be there to make himself better," Tampa Bay principal owner Stu Sternberg said.

Franco put together a 43-game on-base streak to tie Cincinnati's Frank Robinson (1956) for the longest in major league history among players under 21. He went 7 for 19 (.368) with two homers and four RBIs in four postseason games.

"It's a player that is incredibly skilled, incredibly driven and I think is only scratching the surface in terms of the impact he is likely to make on this club over the years ahead," president of baseball operations Erik Neander said. "The sky's the limit. The abilities, it's all there. It sets him up for what could be a historic career."

Franco gets a $5 million signing bonus, with $2.5 million payments on Dec. 1 and June 1. The 2033 club option is for $25 million, with a $2 million buyout. The deal also includes salary escalators if he finishes in the top five in voting for AL MVP.

NOTES: The Rays are working to finalize a free-agent contract with two-time Cy Young Award winner Corey Kluber. The right-hander won the awards with Cleveland, where Rays manager Kevin Cash previously coached. Kluber was slowed by a shoulder injury in 2021, going 5-3 with a 3.83 ERA in 16 games with the New York Yankees. He was limited to 35 2/3 innings in 2019 and one inning in 2020 due to injuries.