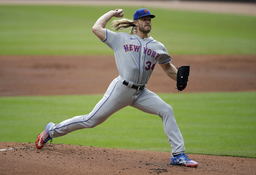 ANAHEIM, Calif. (AP) Right-hander Noah Syndergaard has agreed to terms on $21 million, one-year deal with the Los Angeles Angels, leaving the New York Mets for a lucrative fresh start on the West Coast.

The Angels announced the deal Tuesday night for the 29-year-old Syndergaard, a dominant and intimidating starter when at the height of his talents during his seven years with the Mets.

The long-haired, 6-foot-6 Texan earned the nickname "Thor" with his powerful pitch selection and mound presence, but injuries have hampered a career that includes 47 victories, a 3.32 ERA and one All-Star selection in 2016.

Syndergaard has made only two major league appearances since 2019 due to Tommy John surgery and other ailments, pitching a pair of one-inning stints late last season. Syndergaard didn't throw his curve or slider in his late-season appearances, but the Angels, the Mets and other interested teams clearly were reasonably confident he will regain a semblance of his best form.

Syndergaard has pitched only four full big league seasons, but he racked up at least nine wins, 150 innings and 155 strikeouts in all four.

Syndergaard will be the centerpiece of the latest attempt to build a respectable rotation for the Angels, whose annually subpar pitching has been the primary reason for their six straight losing seasons and seven-year playoff drought, even with three-time MVP Mike Trout in the lineup.

Even with Shohei Ohtani, Los Angeles' rotation ranked 22nd in the majors in ERA last season after languishing in 29th place in the previous two seasons. Pitching has been the top priority for new general manager Perry Minasian, who used all 20 of his draft picks on pitchers earlier this year.

Texans with 100 mph fastballs have succeeded in Anaheim before: Nolan Ryan pitched seven stellar seasons for the California Angels, racking up five All-Star selections and four of his seven no-hitters. His No. 30 is retired at Angel Stadium.

Syndergaard gets a straight $21 million in his Angels deal, which includes no bonuses. He will be a free agent again next winter. The Angels also will lose their second-round draft pick next year because Syndergaard was tendered an $18.1 million offer for 2022 by the Mets.

The Angels likely aren't done shopping for pitchers, even though they've been burned by veteran acquisitions in the recent past from Matt Harvey and Trevor Cahill to Julio Teheran and Jose Quintana. Los Angeles is hoping to add at least one more free agent starter to join a 2022 rotation that will include Ohtani, Patrick Sandoval and promising Jose Suarez.