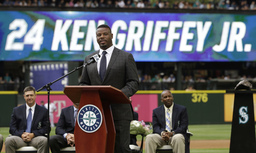 SEATTLE (AP) Hall of Famer Ken Griffey Jr. is investing in the Seattle Mariners in a way he never has before.

He'll be part of the ownership group going forward.

The Mariners announced Monday that their most famous former player has also become the first one to purchase a stake in the ballclub. The purchase had been years in the making.

"It was just a conversation and it just kept snowballing, and then finally I was able to do what I need to do," Griffey said. "So it wasn't like I woke up and said, `You know what, I think I want to do this now.' Basic conversation. What's next and I was able to pull the trigger this year. I had to wait my turn like everybody else."

Mariners Chairman John Stanton said Griffey purchased shares from another minority owner who still retains a stake in the club.

While Griffey had to wait, the idea of being part of an ownership group stuck with him once his playing career ended in 2010. Griffey and his family became part of the Seattle Sounders ownership group a year ago and he said he had conversations with friends like Michael Jordan and Derek Jeter about further investment.

"I've known Michael for 30 years and you look at certain things that he's created for everybody else, it's almost like you look and say there's the blueprint," Griffey said. "You may not be able to match that, but you can look at it and have an idea of what he's done over the years and how he's grown an empire."

Griffey was the No. 1 overall pick in the amateur draft by the Mariners in 1987. Less than two years later, he made his major league debut and quickly grew into one of the best players of his generation with that familiar "S" on his hat - whether it was turned forward or backward.

Griffey spent his first 11 seasons with the Mariners, helping them to a pair of AL West titles and was the 1997 AL MVP. He engineered a trade to Cincinnati following the 1999 season but made his way back to Seattle for the conclusion of his career in 2009 and part of the 2010 season before retiring at age 40.

"The strength of any partnership is based on the breadth of perspectives of the partners," Stanton said. "All of our partners are passionate fans. But Ken brings a unique perspective to this partnership because he's played the game at a Hall of Fame level, and he's remained involved in the game."

Griffey said he's hoping to bring the player perspective into some of the conversations that may take place among the owners.

"It just gives a different viewpoint that maybe they haven't thought of," Griffey said. "But you do have some smart people in the room and you got some people who care."