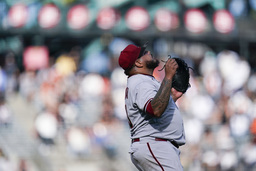 SAN FRANCISCO (AP) Sergio Alcantara had a pair of two-run doubles for Arizona in the Diamondbacks' 8-4 win over San Francisco which eliminated the Giants from postseason contention on Saturday.

Christian Walker went 3 for 5 with an RBI double, finishing a homer shy of hitting for the cycle, for Arizona.

"I think he's got an all-field approach and he can change mentalities," Lovullo said. "He can drive baseballs, he can stay on it and deliver clutch base hits like he did today."

J.D. Davis and Mike Yastrzemski homered for San Francisco, which ended its five-game winning streak. The Giants have won 10 of their last 12 games.

"I think the fight this team has shown, particularly in September, was really, really impressive," manager Gabe Kapler said. "Today was disappointing. We didn't play our best baseball. I think that was pretty clear. But I think even in a game that wasn't a quality game for us, we were still fighting at the end of that game."

Drey Jameson (3-0) won for the third time in his fourth career start, allowing two runs on six hits in six innings. The right-hander struck out seven and walked two.

Scott Alexander served as an opener for the Giants, pitching 1 1/3 scoreless innings.

Jakob Junis (5-7) followed with 4 2/3 frames, surrendering four runs on eight hits to take the loss. He struck out four and walked two.

Thairo Estrada put San Francisco ahead in the third inning with an RBI fielder's choice.

Arizona responded with three runs in the fourth on a sacrifice fly by Rojas and Alcantara's first two-run double.

Davis homered to center in the sixth to bring San Francisco within one, but the D-backs erupted for five runs in the seventh, capped by Alcantara's second two-run double.

Yastrzemski homered to right in the eighth. Ford Proctor added a sacrifice fly in the ninth.

Estrada stole his 20th and 21st bases of the season, becoming the first Giants player to steal at least 20 bases since Hunter Pence had 22 in 2013.

Rojas stole his 22nd base for Arizona.

Diamondbacks: 3B Emmanuel Rivera was a late scratch after an MRI revealed a small fracture in his left wrist. He will miss the rest of the season.

Giants: OF/IB LaMonte Wade Jr. returned after missing four games with thumb soreness, batting second and going 1 for 4. ... RHP Logan Webb will be placed on the 15-day injured list with back stiffness, ending his season. "He's feeling a little bit of lower back stiffness, tightness, but this is much more about his workload and understanding where we are in the season," Kapler said. Webb pitched a career-high 192 1/3 innings this year.

RHP Zach Davies (2-5, 4.18 ERA) starts Sunday's series finale for Arizona. He has lost four straight decisions since his last win on May 13. Alexander will open for San Francisco again.