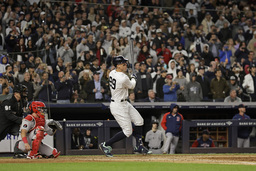 NEW YORK (AP) It's only been a few days since Aaron Judge went deep. It just feels like more, with history hanging on his every swing.

Judge was held without a home run for the third straight game, keeping him at 60 for the season and one shy of Roger Maris' American League record, but the New York Yankees beat the Boston Red Sox 5-4 on Friday night.

"He's getting off the right swings. He's making good swing decisions. It's going to come," Yankees manager Aaron Boone said. "But it is a peek behind just how great a player he is, to that when he doesn't hit the ball out of the ballpark, he's still impacting us in a big way."

Jose Trevino singled home the tiebreaking run with two outs in the eighth inning, and the first-place Yankees reduced their magic number to four for clinching the AL East title. They've won five games in a row and nine of 11.

With four of Maris' children in the ballpark again, Judge went 1 for 4 with a sharp single. He struck out twice and lofted a high fly to left field that excited the sellout crowd of 47,346 for a second or two.

Since connecting for No. 60 on Tuesday night against Pittsburgh, the closest Judge has come to matching Maris' 1961 mark was a 404-foot drive caught right in front of the center field fence Thursday.

The slugger has two games left to catch Maris on New York's current homestand - Saturday afternoon and Sunday night versus the rival Red Sox. After that, the Yankees head to Toronto and have just three home games remaining: Sept. 30 to Oct. 2 against Baltimore.

One night after the Yankees wrapped up their sixth consecutive playoff berth, Boone and ace Gerrit Cole were ejected in a sixth-inning spat with plate umpire Brian Knight.

Pinch-hitter Harrison Bader drew a two-out walk in the eighth and was credited with a stolen base when a wild pickoff attempt by Matt Strahm (3-4) allowed him to reach third.

Trevino singled to center on the next pitch.

Jonathan Loaisiga (2-3) pitched two scoreless innings, working around a pair of one-out singles in the ninth.

Alex Verdugo tied it for Boston with a three-run homer in the sixth. Tommy Pham also went deep against Cole, who has served up 31 long balls this season - most in the American League.

Verdugo sent a 100 mph fastball into the Yankees' bullpen in right-center, one pitch after Cole thought he had an inning-ending strikeout. The right-hander dropped his head and bent over behind the mound as Verdugo took a slow trot around the bases.

After the inning, Cole pointed angrily at Knight and was ejected for the first time in his career - although the five-time All-Star was probably done for the night anyway after 103 pitches.

"It wasn't even close," Verdugo said. "He wants to steal every pitch. He wants his catcher to steal it."

Boone joined the argument and was tossed for the 24th time as a manager - and career-high seventh this season.

"The damage there late is personally tough to swallow," Cole said. "I think that we made some good strides today and I thought that overall I threw the ball well. It's obviously just an emotional moment."

Batting in front of Judge, No. 9 hitter Aaron Hicks launched his 100th major league homer and added an RBI single. Gleyber Torres gave New York a 4-1 lead with a two-run double off starter Rich Hill in the fifth.

The 42-year-old Hill retired Judge all three times they squared off, including two strikeouts.

"Obviously, there's history on the line and he's having an incredible season," Hill said. "From a pitcher's standpoint and a competitive standpoint, you want to face the best and you want to challenge the best."

Judge laced a hard single in the seventh and has reached base safely in a season-high 22 consecutive games.

"With obviously all the noise around this and the excitement around this, understandably, he's still going out there and just putting together good at-bat after good at-bat," Boone said.

Red Sox: RHP Nathan Eovaldi (shoulder inflammation) allowed three runs over three innings in a rehab start for Triple-A Worcester, throwing 57 pitches. He has been sidelined since Aug. 19 but hopes to return before the season ends. ... All-Star SS Xander Bogaerts was rested. He is batting .314 and began the night second in the AL to Judge (who dropped a point to .315). Bogaerts could be the biggest obstacle between the Yankees slugger and a Triple Crown. ... INF Christian Arroyo rejoined the team after a bout with the flu.

Yankees: 1B Anthony Rizzo was rested. ... INF DJ LeMahieu (toe inflammation) has been taking batting practice and it's possible he could come off the injured list next week in Toronto.