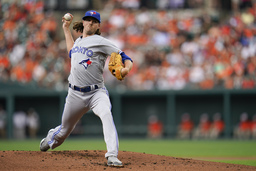 BALTIMORE (AP) Kevin Gausman made a triumphant return to Camden Yards and Teoscar Hernandez homered, leading the Toronto Blue Jays to a 7-3 victory over the Baltimore Orioles on Monday in the opener of a doubleheader.

Gausman (11-9) allowed two runs and seven hits in 6 2/3 innings in his first start at Baltimore since he was traded from the Orioles to Atlanta in 2018. The right-hander won consecutive starts for the first time since May.

"It was weird to hear the `O' chant and realize they're cheering against me now," Gausman said. "That was kind of weird, but it was really cool just warming up and the Baltimore faithful here kind of letting me hear it, good and bad. It was cool. It's a special place for me."

Toronto won its fourth in a row and increased its lead over Baltimore for the American League's third wild card to 3 1/2 games. The Blue Jays and Orioles play 10 times over the final 31 days of the regular season.

Anthony Santander homered from both sides of the plate for Baltimore, which has lost two in a row after a four-game win streak. Adley Rutschman had two hits and scored a run.

Hernandez hit his 20th homer in the eighth, a solo shot that lifted Toronto to a 4-2 lead. After Santander connected in the bottom half, the Blue Jays put it away with three runs in the ninth.

The 31-year-old Gausman was back in a familiar environment for the first time in more than four years. Baltimore took the right-hander with the No. 4 pick in the 2012 draft, and he zipped through the team's minor league system. Gausman debuted in 2013 and went 39-51 with a 4.22 ERA in 150 games with the Orioles.

His biggest obstacle Monday was arguably a fourth-inning balk call. Gausman stormed off the mound and started arguing with second base umpire Jeff Nelson before Bichette rushed in to hold him back.

"If you actually look at the replay, I did stop," Gausman said. "I just felt like Jeff, for whatever reason, wanted to make that call and went into the game knowing that he was going to make that call. It's unfortunate. Obviously, I was pretty heated and Bo kind of saved of me and did a good job of just reminding me that `Hey, we have two games today. It's not just one game.'"

Mike Baumann (1-3), who served as Baltimore's 29th man for the doubleheader, yielded three runs in five innings in his first major league start. Baumann, who made 11 relief appearances with the Orioles in the last two seasons, struck out two.

"Baumann did a nice job, giving us five innings against a good club," Baltimore manager Brandon Hyde said. "I thought he threw a bunch of strikes. His fastball was on the plate. He had a nice fastball, had a tough time putting guys away. He gave us five good innings, kept us in the game."

Toronto tied it at 1 in the second when Matt Chapman doubled and Cavan Biggio singled him home. Alejandro Kirk's grounder brought in a run in the third, and Bichette made it 3-1 with a run-scoring groundout in the fifth.

Santander also hit a solo drive in the first in his seventh career multihomer game. Ryan Mountcastle delivered an RBI double in the sixth.

The holiday doubleheader included a makeup of an Aug. 10 rainout during Toronto's first visit to Baltimore this season.

Blue Jays: RHP Zach Pop was added as the team's 29th man. Pop worked a scoreless ninth in the opener.

Orioles: In addition to adding Baumann, Baltimore recalled RHP Beau Sulser from Triple-A Norfolk for and optioned RHP Rico Garcia to Norfolk. Garcia had a 4.50 ERA in six games with the Orioles. ... Sulser was optioned back to Norfolk after pitching an inning in the first game. Baltimore recalled LHP Bruce Zimmermann from Norfolk for the nightcap. . Baltimore claimed RHP Jake Reed off waivers from the Los Angeles Dodgers and placed INF Jonathan Arauz on the restricted list. RHP Phoenix Sanders cleared outright waivers and was assigned to Norfolk.