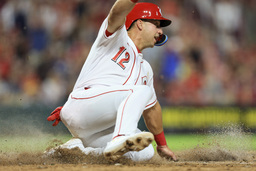 CINCINNATI (AP) Jonathan India drove in Spencer Steer from third base with a game-ending chopper against Colorado's five-man infield, sending the Cincinnati Reds past the Rockies 3-2 on Friday night.

Steer, who hit his first career home run in the fifth in his major league debut, led off the ninth with a double against Alex Colome (2-7) and went to third on a one-out wild pitch. Jake Fraley was intentionally walked and took second on fielder's indifference.

The Rockies moved into the stacked infield with three fielders on the left side. India hit a bouncer up the middle that shifted center fielder Garrett Hampson caught on the grass in front of second base, but he had no play on Steer. India was credited with a single.

It was the third time in the last two games the Reds faced five-man infields in game-ending situations. They fell short twice in extra innings during a loss to St. Louis on Wednesday.

"That was pretty cool," said India, who already had extended his career-high hitting streak to 15 games (21 for 59, .356), the longest active streak in the majors. "That ball was four feet outside, but I wanted the hit."

India said he was glad Hampson didn't throw to first.

Fraley tied it at 2 when he greeted Dinelson Lamet with a leadoff homer in the seventh. It was Fraley's first career pinch-hit homer.

Each team had a player connect for his first career home run.

Sean Bouchard's two-run drive in the third landed four rows deep in the left field lower deck and gave Colorado a 2-0 lead. Steer's leadoff shot in the fifth, also his first career hit, landed on the green turf in front of the center field batter's eye.

Steer, acquired from Minnesota at the trade deadline, added two walks to reach base in all four of his plate appearances.

"It's pretty unbelievable," he said. "I'm at a loss for words. I don't know if you wrote it up any better. I made memories that will last the rest of my life. You only get one debut."

"He'll make an out sometime, but he had a great night at the plate," Reds manager David Bell said. "He did show he knows what he's doing."

Alexis Diaz (5-2) gave up a hit in a scoreless ninth to get the win.

Colorado left-hander Kyle Freeland pitched around eight hits to last 5 2/3 innings. He gave up one run with a walk and three strikeouts while remaining winless in five starts since Aug. 4 at San Diego.

Sidearm right-hander Justin Lawrence walked the first batter he faced to load the bases before striking out Jose Barrero to end the sixth.

Luis Cessa lasted a season-high five innings in his fourth start of the season after being moved from the bullpen to shore up Cincinnati's injury-ravaged rotation. Cessa allowed four hits and two runs with two walks and four strikeouts.

The last Reds player before Steer to homer for his first major league hit was TJ Friedl last Sept. 19 against the Dodgers.

Reds RHP Fernando Cruz also made his major league debut at the age of 32 years and 158 days, the oldest player to debut for Cincinnati since LHP/OF Pat Scantlebury at 38 years, 160 days on April 19, 1956, according to the Elias Sports Bureau and the Reds. Cruz pitched a perfect sixth with two strikeouts.

RF Aristides Aquino easily recorded his NL-leading 11th outfield assist in the eighth, catching Brendan Rodgers' flyball and throwing out Bouchard at first base while the runner was racing to third. Aquino went into the game tied for the NL lead in outfield assists. The Reds lead all major league outfields with 32 assists.

Rockies: OF Yonathan Daza (shoulder) started in center field and went 3 for 4 for Triple-A Albuquerque at Sugar Land in the first game of his rehab assignment on Thursday. He was scheduled to play seven innings on Friday.

Reds: RHP Hunter Greene (shoulder) threw 27 pitches in the game and another eight in the bullpen afterward in the first game of his rehab assignment with Triple-A Louisville on Thursday against Indianapolis. Greene will make at least one more start, Reds manager David Bell said.