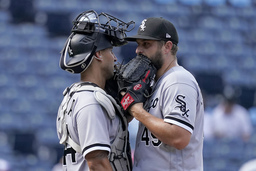 KANSAS CITY, Mo. (AP) Drew Waters drew a bases-loaded walk to break an eighth-inning tie in his major league debut, boosting the Kansas City Royals to a 6-4 win over the Chicago White Sox on Monday in a game rescheduled because of the lockout in April.

Joe Kelly (1-3), the seventh of eight White Sox pitchers, hit a pair of batters to start the inning. Ryan O'Hearn singled, and Waters drew a five-pitch walk with one out to break a 4-all tie.

"It's a big deal just getting here and the being able to contribute like that," Royals manager Mike Matheny said. "He did a great job. He showed a lot of poise on some pretty close pitches."

Waters, who was recalled from Triple-A Omaha before the game, was hoping to do more.

The White Sox rallied from a four-run deficit after their starter, Michael Kopech, exited the game having faced just four hitters.

"He felt something in his hamstring," White Sox manager Tony La Russa said. "You could tell it affected his velocity. It was down, so we got him out of there."

Kopech hit a batter, allowed an RBI single to Salvador Perez, and walked the bases full before leaving with left knee soreness.

"What sucks most about today is I put the team in a tough situation," Kopech said.

Elvis Andrus drove in three runs in his third game with the White Sox. Chicago signed the veteran shortstop on Friday after the Oakland Athletics designated him for assignment.

Jose Abreu had three hits and two walks for the White Sox, who have dropped four of five since winning five straight.

Chicago stranded 11 runners, including eight from the fourth through sixth innings.

"We had chances and couldn't break open the inning," La Russa said. "Left a lot of guys on base. Just a very frustrating loss."

Amir Garrett (3-1) pitched a scoreless eighth and Scott Barlow finished for his 20th save.

"The bullpen did a great job today," Matheny said. "Those guys are on point just about every night. Amir, in a real tough spot, we needed him to come through."

Perez snapped a three-game hitless streak (0-for-10) as the Royals batted around in the first inning, scoring four. Michael Massey and O'Hearn also had RBI hits.

The six runs were the most scored by the Royals since Aug. 10. Kansas City batted .167 while losing six of seven on the road last week, totaling 10 runs.

Chicago batted around in the fourth, capped by Andrus' two-run single, cutting Kansas City's lead to 4-3.

Andrus then tied the game with an RBI double in the seventh.

After batting in the second, Royals 1B Vinnie Pasquantino left the game with right shoulder discomfort.

The Royals optioned OF Nate Eaton to Omaha to make room for Waters.