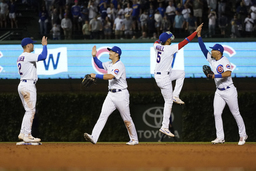 CHICAGO (AP) Nico Hoerner hit a tiebreaking double in the eighth inning, and the Chicago Cubs beat the Pittsburgh Pirates 3-2 on Monday night for their season-high fifth straight win.

Seiya Suzuki set up Hoerner's clutch hit when he reached on rookie shortstop Oneil Cruz's throwing error. Suzuki advanced on Ian Happ's groundout and then hustled home on Hoerner's drive into the gap in right-center.

"He wants that moment probably more than anyone I've been around," Cubs manager David Ross said of Hoerner. "Nice base hit for him there."

Mychal Givens (6-2) worked the eighth for the win, and Scott Effross got three outs for his first save in three chances.

Josh VanMeter hit a tying RBI double for the Pirates in the fifth. Cruz singled home a run, and Yerry De Los Santos (0-2) got the loss.

Pittsburgh has dropped two straight and seven of nine overall.

Ortega's fifth homer - a two-out drive to right against JT Brubaker in the third - gave Chicago a 2-1 lead. Ortega also singled in the first, stopping an 0-for-29 slump.

The Cubs are expected to be sellers at the Aug. 2 trade deadline, so the two-game set against Pittsburgh could be the last one in the home dugout at Wrigley Field for several players.

Happ, an All-Star outfielder, said he was doing his best to take it all in before Chicago hits the road. Ross added he wasn't manipulating the lineup to give players a last go-round at the iconic neighborhood ballpark.

"I find out (about a trade) about five seconds before the player does," he said.

The waiting seems to have taken a toll on All-Star catcher Willson Contreras, who got emotional talking about the leadup to the deadline.

"I'm just trying to appreciate everything and all the memories I have here," he said. "Probably my last homestand."

Actor and Chicago native Bob Odenkirk, who plays the titular character in the TV series "Better Call Saul," led the crowd in the seventh-inning stretch singalong.

Pirates: OF Bryan Reynolds (right oblique strain) was reinstated from the 10-day injured list. OF Jake Marisnick (turf toe) was placed on the 10-day IL on Sunday.