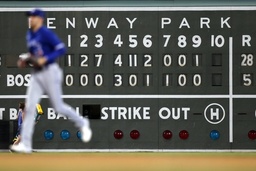 BOSTON (AP) Raimel Tapia put his head down and started a slow jog to first base, not sure he'd gotten the pop he wanted when he drove a bases-loaded fly ball to deep center field in the third inning.

Then everything about the play - and the rest of the night - changed.

Tapia hit an inside-the-park grand slam after a misplay by Boston center fielder Jarren Duran and the Toronto Blue Jays set a franchise record for runs in a game, rolling past the Red Sox 28-5 on Friday night.

Toronto came within two of the modern major league record for runs in a game after stranding two runners in the ninth inning with Boston infielder Yolmer Sanchez on the mound.

Every Blue Jays starter had at least two hits, and Lourdes Gurriel Jr. tied Frank Catalanotto's franchise record with six of them.

"That was awesome," interim manager John Schneider said. "We talked about it before the game, how you can come out a little bit sleepy and you can came out hot. I think we came out hot, obviously."

The 28 runs are the most ever yielded by a Red Sox team, eclipsing the previous mark in a 27-3 loss to Cleveland in 1923.

The Fenway Park faithful jeered throughout the night - except for a wedding proposal on the video board with the home team trailing 25-3. The woman's "yes" was one of the few times Boston fans found reason to cheer.

Toronto entered the day with a two-game lead over the Red Sox for the AL's final wild-card spot. The Blue Jays improved 7-3 against Boston this year.

That started a 29-hit night for Toronto - winners of four straight - which featured nearly as many follies by the Red Sox.

With two outs in the third and Toronto leading 6-0, Tapia lifted a two-out fly to center against reliever Austin Davis.

Duran took a couple steps back, then a couple in, then put up his hands in confusion. Boston fans groaned when the ball landed on the warning track behind him.

Duran walked slowly toward the ball while left fielder Alex Verdugo raced over, slid to scoop it up and fired it toward the infield. The relay home wasn't close to nabbing Tapia, who picked up speed when he realized Duran had lost the ball.

"I hit it on the barrel, but at the same time I didn't think it would go too far," Tapia said.

Duran called losing sight of the ball "the most hopeless feeling you could ever feel."

"I just lost it in the twilight," Duran said. "It happens. (Verdugo) was right there. Obviously, I should have taken a step or two. He was already going to beat me to the ball. I just didn't want to get in his way. ... Next time, I know to take one or two steps."

Boston blundered on defense again in the fifth. Trailing 15-3, Chapman lifted a two-out pop-up on the infield that fell between catcher Kevin Plawecki, reliever Kaleb Ort and third baseman Rafael Devers for a base hit that allowed another run to cross.

It prompted more ridicule and disdain from Boston fans who remained in their seats. Those that stayed tried to make the best out of a drab night at the ballpark.

Fans still rose to their feet for the traditional Fenway signing of Neil Diamond's "Sweet Caroline." Yet, on an evening as memorable as it was forgettable, it too ended with a smattering of boos.

The only cheer left? When Duran struck out to end the game.

The modern MLB record for runs in a game is 30, set by the Texas Rangers against the Baltimore Orioles on Aug. 22, 2007. The all-time mark is 36 for the Chicago Colts against the Louisville Colonels in 1897.

Blue Jays: Schneider said holding out Springer was cautionary and that the center fielder, who sat out the All-Star Game with the issue, could return this weekend.

Red Sox: Red Sox slugger J.D. Martinez was a late scratch after experiencing back spasms. Rob Refsnyder took his place in the lineup at DH and hit second. ... LHP Chris Sale was officially placed on the injured list with a broken left finger. RHP Brayan Bello was recalled from Triple-A Worcester and Sanchez was selected to the active roster.

It was the fourth career grand slam for Tapia, his most recent coming on May 4, 2021 against San Francisco. It was the Blue Jays' fourth grand slam of the season.