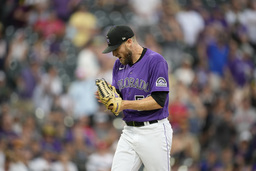 DENVER (AP) Kris Bryant had three hits and an RBI, Charlie Blackmon extended his hitting streak to seven games with an RBI single, and Jose Urena pitched six scoreless innings in the Colorado Rockies' 2-0 victory over the Pittsburgh Pirates on Saturday.

Bryant singled in an unearned run with two outs in the fifth inning and Blackmon drove in an insurance run with a two-out single in the seventh as the Rockies extended their winning streak to a season-best five games. Bryant reached four times, on three hits and walk.

"Really good (team) baseball happening right now," Bryant said. "Getting the big homer is great, but getting on base four times, too, it's just a different type of game. I like doing that. I take pride in that. Nothing too, too flashy but just putting together good at-bat and getting the next guy up there."

Bryant is hitting .328 since being reinstated from the injured list June 27, with four homers and eight RBIs. He has reached base in 18 straight games, the third-longest active streak in the majors, and the Rockies are 9-6 since his return.

"As much as we complain about playing every day, we need it," said Bryant, who has two stints on the IL with back issues this season and missed three games earlier this week after the birth of twin sons. "You need to get out there to see the pitches and get your at-bats to really feel comfortable, and that's kind of where I am at right now."

Urena (1-1) gave up five hits and has given up three earned runs in 18 2/3 innings (1.47 ERA) in three starts since being purchased from Triple-A Albuquerque. He will remain in the rotation after the All-Star break, starting Saturday in Milwaukee.

"He's pumping that fastball in there in the mid-90s (mph) with sink, keeping the ball down, occasional slider, occasional change," Colorado manager Bud Black said. "Really throwing the ball well."

Daniel Bard pitched around an inning-opening walk in the ninth for his 20th save in 22 chances.

Pirates' right-hander Mitch Keller (3,-7) was the hard-luck loser, giving up an unearned run and five hits in six innings while striking out six and walking two. He has given up one earned run in his last two starts.

"It's huge momentum, just carrying some really good outings into the All-Star break," Keller said. "Get a nice break and then just keep firing back at it."

With two outs in the fifth inning, Pirates' rookie shortstop Oneil Cruz threw the ball into the Rockies' dugout for a two-base error after fielding Connor Joe's routine grounder. Bryant followed with an RBI single to center field to break a scoreless tie.

Brian Serven walked with one out in the seventh off Yerry De Los Santos and scored after two-out singles by Bryant and Blackmon.

The Pirates had a runner on base in seven of the nine innings, getting three as far as third base. Cruz singled to put runners on first and third with two outs in the sixth, but Urena got Yoshi Tsutsugo to fly out to center to end the inning.

Tyler Heineman singled with two outs in the seventh but was thrown out by center fielder Sam Hilliard attempting to stretch it into a double.

Heineman and Ben Gamel each had two hits for the Pirates, who have lost four in a row after a four-game winning streak.

Colorado is 12-3 in Coors Field since being swept by Cleveland in mid-June and have outscored opponents 101-66. The Rockies have won all five series in that span.

"There is no doubt that playing in Denver is a topic among opposing teams on a lot of different levels," said Black, who also has experienced Coors as an opposing manager. "It can get into the mind of the opposing pitcher. A longer series, coming into altitude, can physically affect the opposing team, where I think the Rockies' teams have become accustomed and conditioned to playing at altitude."

Colorado has gained ground in the NL West during its run, going 6-1 against San Diego and 2-1 against the Dodgers and Arizona.

The Pirates are 5-6 as they enter the final game of an 11-day, 12-game road trip that began with a doubleheader in Cincinnati on July 7. The Pirates will conclude their longest road trip since a 12-game journey in August 2005.

Pirates: OF Greg Allen (hamstring) was 3 for 5 with a two-run homer in a rehab game for Triple-A Indianapolis on Friday and is 5 for 11 in three games with the Indians. Allen was placed on the IL before the season opener and his return date has not been determined.

Rockies: RHP German Marquez (right calf) did not need treatment after being struck by a one-hopper in the seventh inning Friday and is fine, Black said. . RHP Carlos Estevez was reinstated from the paternity list and RHP Chad Smith was optioned to Triple-A Albuquerque. . RHP Antonio Senzatela (shoulder) will not return from the IL when eligible Sunday, with LHP Austin Gomber scheduled to start.

Rockies LHP Austin Gomber (5-7, 6.11 ERA) is to start the final game of the three-game series Sunday as the teams enter the All-Star break. Gomber has won his last two decisions and the Rockies have won all three of his starts since he returned to the rotation July 2. The Pirates have not announced a starter.