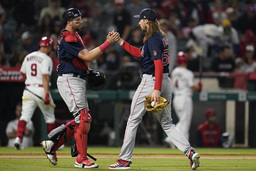 In a bid to break the tension of their epic losing streak Wednesday night, the Halos sent all nine batters up to the plate to songs by the much-maligned Canadian rock band.

These Angels can only wish they had as many big hits as Nickelback, however.

Los Angeles' losing streak reached a team-record 14 games when Bobby Dalbec drove in the only run with a double in the sixth inning for the Boston Red Sox in a 1-0 victory.

"It's a broken record," Angels interim manager Phil Nevin said. "We keep saying it. The effort is good. These guys really want to win a game right now, and we know what it will mean for us when we do."

Nathan Eovaldi (4-2) pitched five innings of six-hit ball with five strikeouts in Boston's season-high seventh consecutive victory. With their second 1-0 win in three days at the Big A, the Red Sox remained perfect in June and on their 10-game West Coast trip (6-0).

With another lifeless offensive performance and pitching that was just good enough to lose, the Angels dropped to 0-2 under Nevin, who replaced Joe Maddon on Tuesday. The Halos' baffling skid is now longer than the previous team record set across the final 12 games of 1988 and the 1989 season opener.

"Every loss is the same," said rookie Reid Detmers, who pitched three-hit ball into the fifth inning. "Obviously closer losses, they can be a little bit tougher, but they all hurt. We're moving in the right direction. Clubhouse is good."

Los Angeles was 24-13 and in first place in the AL West on May 15, but the Angels have gone 3-18 since with a simultaneous collapse of their injury-plagued lineup and their perpetually poor pitching staff.

The Halos got seven singles but were shut out for the third time in six games despite their imaginative accompaniment to the plate. The mild night was no surprise with a lineup featuring six backups, largely due to injuries. Shohei Ohtani went 1 for 4 with two strikeouts as Los Angeles' leadoff hitter.

"Had some great pitching performances," Nevin said. "Offensively, we just didn't get enough guys on early."

Matt Strahm got the final two outs for his third save, completing a stellar performance by five pitchers who didn't walk a batter in Boston's third shutout victory in five games.

"Another good one for them," Boston manager Alex Cora said of his bullpen. "They've been throwing the ball well for a while."

Boston didn't have to face Mike Trout, who didn't play after straining his groin Tuesday night. The Angels aren't concerned about a long-term absence for their three-time AL MVP, who worked out extensively before the game.

But the Halos' lineup is depleted with the simultaneous absences of Trout, Taylor Ward, Anthony Rendon and David Fletcher due to injuries. Luis Rengifo also went on the paternity list before the game.

Detmers had his second straight start without allowing a run. The rookie exited after Christian Arroyo's one-out double in the fifth sent Jackie Bradley Jr. to third, but reliever Archie Bradley escaped the jam.

Boston rallied in the sixth when Alex Verdugo drew a two-out walk from Jimmy Herget (1-1) and promptly scored on a double into the right field corner by Dalbec, who also drove in two runs Tuesday night.

ALL THE RIGHT REASONS

Nevin said the Nickelback serenade wasn't his idea, but he wasn't mad.

"I like it," Nevin said. "I like Nickelback. The entire game, I've got songs in my head I can't stop singing."

Detmers said the scheme "definitely threw us off a little bit, but that's just to keep us loose, have some fun."

Angels: Rendon (right wrist inflammation) has "made some good progress lately," according to athletic trainer Mike Frostad. Rendon took ground balls and hit in the cage. The $245 million third baseman hasn't played since May 26. ... Ward's strained hamstring is "healing up pretty nicely for us," Frostad said. The Angels hope their starting right fielder will play Tuesday against the Dodgers when he's eligible to come off the injured list.