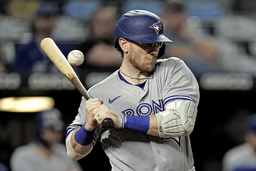 KANSAS CITY, Mo. (AP) Bo Bichette hit one of three Toronto home runs and five Blue Jays pitchers combined on a two-hitter in an 8-0 win over the Kansas City Royals on Monday night.

Ross Stripling (2-1) earned the win as he allowed just one hit over five innings, matching his season high. He struck out two and didn't walk a batter. Stripling pitched more than four innings for just the second time this season. Stripling, who made his sixth start, has been used out of the bullpen eight times.

"You have no idea how happy I am that Strip (Stripling) went five innings," Blue Jays manager Charlie Montoyo said. "That way we could save our (bullpen) arms. We also swung the bats, but he threw (less than) 60 balls and get through five. He was lights out."

Stripling was pleased with the result as well.

"Going into it I thought I was going to have four innings," he said. "I knew I would be in the 50- to 60-pitch range. I hadn't gone more than 35 in the last couple of weeks. I was able to go five innings. That was the priority: stay efficient and try not to put too much on the bullpen.

Bichette's home run was the first Toronto hit of the night after the game was delayed 2:05 because of weather.

Daniel Lynch (2-5) took the loss. He allowed six runs on six hits, with two walks and four strikeouts in 5 2/3 innings.

Both managers were impressed with Stripling's effort.

"He set everything up for us," Montoyo said. "He was fun to watch tonight. He's done a great job wherever we needed him."

"We could never get in hitters' counts," he said. "He was in control from the top."

Both starting pitchers were efficient at the start of the game. Michael A. Taylor's one-out single in the bottom of the third inning was the first baserunner. Taylor had both of Kansas City's hits.

George Springer walked leading off the fourth for Toronto's first baserunner and he came around to score on Bichette's line drive home run to right center.

The Blue Jays got another run in the fifth on a sacrifice fly by Danny Jansen.

Vlad Guerrero Jr. lined the first pitch he saw in the sixth 423 feet over the fence in right center. After Alejandro Kirk singled, Santiago Espinal hit the Blue Jays' third home run of the night, giving the Jays a 6-0 lead and ending Lynch's night.

The Blue Jays added an unearned run in the seventh on an RBI single by Teoscar Hernandez. They got their eighth run on a wild pitch in the eighth.

Royals OF Andrew Benintendi was held out of the lineup Monday after fouling a ball off his right calf in Sunday's loss to Houston. Manager Mike Matheny said, "He's good. It kind of stung. It began to cramp up. It's happened to him a couple of other times, but it was more off the top of his foot or the chin. This time is was off the muscle, which was really grabbing and wasn't allowing him to run full speed."