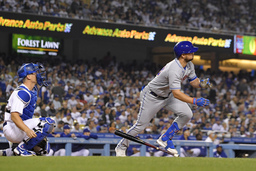 Gonsolin (6-0) struck out five and walked one in his first career start against the Mets. The right-hander has allowed two runs or fewer in all 10 starts and lowered his ERA to 1.59.

Gonsolin didn't give up a hit until the fourth - a single by Luis Guillorme after left fielder Chris Taylor's snow-cone catch on Starling Marte's line drive. Initially ruled no catch, the Dodgers successfully challenged the call.

Craig Kimbrel retired the side in the ninth to close out the Dodgers' fourth shutout. He had allowed runs in his past three outings, but struck out slugger Pete Alonso swinging to earn his 11th save.

The high-powered Mets managed just one hit after Gonsolin exited - a single by Jeff McNeil in the seventh. Their only other hit was J.D. Davis' two-out double in the fifth.

New York, which piled up 77 runs in its previous nine games, was the only major league team that hadn't been blanked this season.

The Dodgers were coming off a three-game home sweep by Pittsburgh for the first time in 22 years. Although they still struggled to convert with runners in scoring position, the win moved them four games ahead of second-place San Diego in the NL West.

Trea Turner doubled into the left-field corner on Taijuan Walker's first pitch of the sixth to extend his 25-game hitting streak, tops in the majors this year.

The Mets' run of 26 consecutive shutout innings ended in the fifth. Mookie Betts' RBI single to left-center scored Taylor, who went 2 for 3 in addition to playing stellar defense.

Justin Turner chased Walker with a two-out RBI double to deep right in the sixth.

Mets: SS Francisco Lindor sat out with a swollen right middle finger after he injured it closing a double door in his hotel room. He's likely to be back in the lineup Friday.

Dodgers: OF Kevin Pillar went on the injured list with a left shoulder fracture. He left Wednesday's game in the sixth inning. ... LHP Clayton Kershaw (pelvis) will throw a rehab game likely Sunday at Class A Rancho Cucamonga.

Dodgers: LHP Tyler Anderson (6-0, 2.90) has tossed 20 scoreless innings since allowing two runs in the first against Arizona. He's 1-0 with a 3.31 ERA in three career appearances against the Mets.