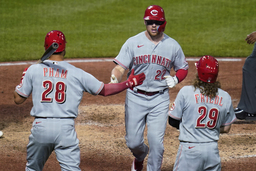 PITTSBURGH (AP) Mike Moustakas homered twice and Brandon Drury drove in four runs to break out of a slump and lead the resurgent Cincinnati Reds to an 8-2 victory over the Pittsburgh Pirates on Friday night.

Moustakas hit a solo shot into the right field stands in the fourth inning to break a 2-2 tie. In the seventh, he had another solo homer to make it 8-2, two batters after Drury had a two-run drive.

It was the 15th multihomer game for Moustakas, who has 199 career home runs. He helped the Reds win for the sixth time in eight games following a 3-22 start.

"We're playing good baseball. We played a real good game tonight," Moustakas said. "The pitching has been phenomenal, and the offense has been great. It's great to rattle off some wins in a row."

Tyler Mahle (2-4) won for the first time since opening day, snapping a six-start winless streak. He gave up two runs on five hits in six innings while striking out eight and walking one.

Reds starters have pitched six innings in back-to-back games after not making it that far in the first 31 games of the season.

Drury's two-run double in the fifth gave the Reds a 5-2 lead. He had gone 14 at-bats without a hit.

Of the 16 balls put in play against Keller, 11 had an exit velocity of at least 95 mph.

"Obviously, when you don't produce it's frustrating," Keller said. "Just not executing good pitches and getting beat by it. They're a good hitting team. They're hot right now. I can't leave stuff over the middle of the plate. When you're missing your spot, put it in their hot zones, they're going to take advantage of it."

The Pirates have dropped the first two games of the four-game series after taking two of three from the NL West-leading Los Angeles Dodgers to begin the week.

Cincinnati's Tyler Naquin had two doubles among his three hits.

Ben Gamel, who opened the scoring with his first career leadoff home run, and Daniel Vogelbach each had two hits for the Pirates.

The Reds moved in front 2-1 in the top of the third when Naquin and Kyle Farmer hit back-to-back doubles and TJ Friedl had a sacrifice fly.

Ke'Bryan Hayes countered with a tying RBI double in the bottom of the inning.

Moustakas broke the tie in the fourth with his first homer and the Reds rolled from there.

"I had two strikes on me on that first home run and I'm up there battling and battling," Moustakas said. "I got a fastball down and in, got the barrel to it and it went out of the park."

Pittsburgh center fielder Bryan Reynolds is 1 for 25 with runners in scoring position this year after going hitless twice in those situations. He is batting .214 overall after starting in the All-Star Game last season.

The Reds are moving struggling right-hander Vladimir Gutierrez to the bullpen. He is 0-5 with an 8.65 ERA in six starts after winning nine games as a rookie last year.

With the Reds going from six starting pitchers to five, right-hander Connor Overton will remain in the rotation. The 28-year-old rookie is 1-0 with a 1.59 ERA in three starts.

"I'm anxious to see him pitch out of the bullpen, but that does not mean this is a long-term decision," Bell said. "He could easily go back into the rotation. He's going to remain built up enough to where it'd be an easy transition to go back to starting."

The Pirates added RHP Tyler Beede to the active roster a day after claiming him off waivers from San Francisco. He will be used as a reliever.

"The stuff is there," Pirates manager Derek Shelton said of the first-round draft pick in 2014. "We feel our staff can help him."

LHP Cam Alldred was optioned to Triple-A Indianapolis after pitching a scoreless inning Thursday against the Reds in his major league debut.

Reds: 1B Joey Votto (COVID-19) has started hitting off a tee and is expected to begin playing rehab games in the next few days. The 2010 NL MVP has been sidelined since May 2.

Reds: RHP Luis Castillo (0-0, 5.79 ERA) will make his second start of the season Saturday night. He did not pitch in spring training and missed the first 28 games with a shoulder strain.

Pirates: RHP Zach Thompson (1-3, 7.08) pitched five scoreless innings against the Reds last Sunday but did not factor in the decision.