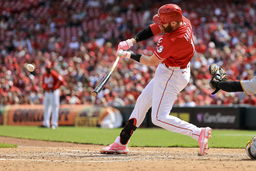 CINCINNATI (AP) Colin Moran hit a grand slam and a two-run homer against his former team, powering the Cincinnati Reds to a 7-3 victory over the Pittsburgh Pirates on Sunday.

Tyler Mahle pitched five solid innings and the Reds rallied from a 2-0 deficit in the sixth. Cincinnati took two of three against Pittsburgh to win a series for the first time this season, improving the majors' worst record to 5-23.

The Reds had lost nine straight and 20 of 21 before winning the first game of Saturday's doubleheader. Friday night's game was rained out.

Moran's bases-loaded drive to right field in the sixth gave Cincinnati a 5-2 lead. He homered to center with Kyle Farmer on first base in the eighth, giving him six RBIs in a game for the first time in his career. They were his first two home runs this season.

Moran spent the past four seasons with Pittsburgh after arriving from Houston in a trade for Gerrit Cole. He signed with the Reds in March and has started the last six games at first base with slugger Joey Votto on the COVID-19 injured list. Moran began the day batting .184 with one extra-base hit.

He was coy when asked how special it was to do so much offensive damage against his old team.

"It feels good any time you hit a grand slam," Moran said. "But yeah, it all felt good."

"The clubhouse is so happy for him," Bell said. "Such a professional. He started the season not playing a lot and has just stayed ready. Works super hard, quiet, but we know he can hit. To do it right there against his old team, it was just a great day. There's something special when you have your friends over there to be able to come through like that."

Mahle allowed only one hit, a two-run homer by Michael Perez in the second. Art Warren (1-1) struck out three in two scoreless innings for the win.

"You look at what Art did, coming in and shutting down those middle innings," Bell said. "I think there's a lot to be said for that and just the momentum of what that does for your offense."

Pirates right-hander Zach Thompson also turned in a fine outing, shutting out the Reds through five innings. He permitted two hits and struck out six in his best start of the season.

Thompson was ill and didn't know whether he'd be able to pitch until 90 minutes before game time.

"We were hoping to get three innings out of him," Pirates manager Derek Shelton said. "The fact that we got five was pretty admirable. After the end of the fourth he was pretty well drained."

In the Cincinnati sixth, Brandon Drury reached on a bloop single against reliever Dillon Peters (3-1), who walked the next three batters to force in a run.

Heath Hembree, who pitched out of the Reds' bullpen last season, came in for Pittsburgh and struck out Farmer before serving up a 2-1 fastball that Moran crushed into the right-field seats.

Moran homered again in the eighth off Chase De Jong, a 404-foot shot to center.

"I've been missing a lot of my pitches so it just kind of felt good to finally feel the barrel, and in that situation," said Moran, robbed of a potential tying homer by Pirates right fielder Jack Suwinsky on Saturday.

The Reds finally won a series 28 games into the season. They still have 15 players on the injured list, but there was some clutch hitting and decent pitching, with the bullpen showing improvement.

"This can be where it starts," Bell said. "Guys continue to keep playing. It was just a great series. So many great things happened. Tyler, the start he had, the defense, the great at-bats. The guys just continued to compete. As a team we're really happy with the way we're playing. It was a really good weekend, and it's time to just keep going."

Reds: Bell said Votto and OF Nick Senzel are at least a couple of days from returning to the lineup. Both are on the COVID-19 injured list.

The Reds selected the contract of right-hander Joel Kuhnel from Triple-A and designated right-hander Robert Dugger for assignment.

Pirates: Head home and send Jose Quintana (0-1, 3.38 ERA) to the mound against fellow left-hander Julio Urias (2-1, 1.88) and the Los Angeles Dodgers in the opener of a three-game set Monday night.

Cincinnati: RHP Luis Castillo is scheduled to make his 2022 debut Monday night against RHP Brandon Woodruff (3-1, 5.18) in the opener of a three-game series with Milwaukee. Castillo has been out with a right shoulder strain.