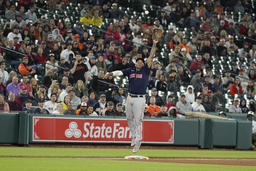 BALTIMORE (AP) Jorge Mateo scored the winning run in the 10th inning on a throwing error by pitcher Hirokazu Sawamura, capping a comeback that carried the Baltimore Orioles past the Boston Red Sox 2-1 Saturday night.

Baltimore had runners on first and second with no outs in the 10th when Robinson Chirinos dropped a bunt in front of the mound. Sawamura (0-1) scooped up the ball and threw it well over the head of third baseman Rafael Devers, allowing Mateo to score easily.

Held without a hit until the sixth inning and trailing 1-0 in the eighth, the Orioles rallied to end a five-game skid.

Jorge Lopez (2-1) pitched two hitless innings for Baltimore. In the 10th, he retired Alex Verdugo with two outs and runners on the corners.

Lopez was the last of six relievers who blanked Boston on two hits after starter Spenser Watkins left in the fifth.

"We pitched extremely well. It started off with Spenser," Orioles manager Brandon Hyde said. "The rest of the guys, they all had great stuff. Just a gutsy performance by our pitching staff."

Lopez, who dropped his ERA to 1.59, said of the 10th inning: "Really hard. You've got one of the best hitters, best lineups. It's not easy. Just concentrate, focus on pitch by pitch. That helped me a lot through the whole season so far."

Xander Bogaerts drove in the lone run for the Red Sox, who went scoreless over the final nine innings.

Boston starter Nathan Eovaldi took a no-hit bid and a 1-0 lead into the sixth inning. The right-hander retired 17 of the first 18 batters he faced - the lone runner reaching on an error - before Cedric Mullins doubled down the left-field line with two outs in the sixth.

Eovaldi gave up three hits over seven scoreless innings, striking out eight and walking none.

"I feel like I had all my pitches going for me tonight," Eovaldi said. "Tonight I had a real good feel for the splitter, and when I have that pitch working for the righties, it makes it a lot more difficult for those guys to react to it."

In the seventh, the Orioles used two singles and a wild pitch to get two runners in scoring position with two outs. Eovaldi then finished his masterful performance by striking out Tyler Nevin.

"Just trying to have a good mix of pitches right there," Eovaldi said. "I wanted to try and throw that curveball down in the dirt and he swung at it and missed."

But Baltimore pulled even in the eighth against Matt Barnes. Mullins doubled with two outs and scored on a single up the middle by Anthony Santander.

Boston jumped on top in the first inning when Trevor Story hit the game's first pitch for a double, advanced on a groundout and came home on Bogaerts' single past a drawn-up infield.

Watkins allowed one run and five hits over 4 2/3 innings.

Red Sox: J.D. Martinez missed a third straight game with a groin injury. He was in the original starting lineup before being scratched. "I just put him in the lineup until he tells me not to," manager Alex Cora said. "He went out there, he's still feeling it, so we went with Plan B." Christian Arroyo took over at DH for Martinez, who is expected to return Sunday.

Orioles: DH/OF Trey Mancini was held out of the game with bruised ribs. ... Hyde had no update on injured pitchers Chris Ellis (right shoulder inflammation) and Alexander Wells (left elbow inflammation). "They're still getting looked at, still getting treatment," Hyde said.

Eovaldi has issued two walks or fewer in a career-best 24 successive games. In this one, 67 of his 95 pitches were in the strike zone.

Devers is hitting the ball well, playing his position effectively and clearly having a blast in the big leagues. "It's fun to be him," Cora said "He (said) last year that he plays baseball, he makes a lot of money and he hits homers. We love him. We don't take him for granted, either. We know that he's 25 and still learning, but so far you see the product. We're very proud of him."

Red Sox: Struggling RHP Nick Pivetta (0-3, 8.27 ERA) will try to get back on track in the series finale Sunday. Pivetta is 6-1 lifetime against Baltimore, a stat he hopes outweighs Boston's 1-10 record in his last 11 starts.

Orioles: RHP Jordan Lyles (1-2, 5.40) makes his fifth start with Baltimore. In his last outing, Lyles yielded three homers to the Yankees in a 12-8 loss Tuesday.