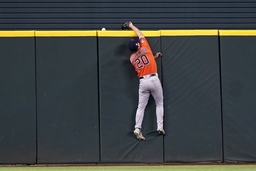 ARLINGTON, Texas (AP) Justin Verlander certainly noticed that Astros batters were being retired one after another. The two-time AL Cy Young Award winner was pretty impressive himself in only his fourth start since Tommy John surgery.

Kyle Tucker hit a tiebreaking pinch-hit homer in the eighth inning, providing the margin of victory for Verlander, and Houston beat Texas 3-2 on Thursday after Rangers left-hander Martin Perez took a perfect game into the seventh.

"They're interesting when you're in the middle of them. I mean, obviously always root for runs, but then all of a sudden you realize, three or four or five innings, I'm like, you know, he's got it," Verlander said. "So kind of knew we'd be in the middle of a pitching duel there. ... It was fun to come out on the right side of it."

Tucker's two-run blast came off Matt Bush (0-1), the first reliever for Texas after Perez retired the first 18 batters before giving up his only run and two hits in the seventh. Perez struck out four without a walk, with 55 of 76 pitches being strikes.

Verlander (2-1) struck out eight, also allowing one run over seven innings. The 39-year-old right-hander, who retired 18 of the first 19 Texas batters, threw 64 of 91 pitches for strikes and didn't have a walk while lowering his season ERA to 1.73.

"He was dealing, and he had been matched by their pitcher, too. He was dealing, both of them," Astros manager Dusty Baker said, adding that Verlander's curveball and slider were working well with his always-good fastball. "That was a classic pitcher's duel. If you took a pitch, it was a strike, and if you swung at it, it wasn't a good pitch to hit."

Blake Taylor pitched a perfect eighth for the Astros. Rafael Montero then worked the ninth with usual closer Ryan Pressly still on the injured list and got his first save despite Corey Seager's one-out homer to straightaway center.

Perez didn't allow a runner until Chas McCormick lined a double into the right-center gap on a full-count pitch leading off the seventh. The lefty got out two more batters out before Yordan Alvarez lined an opposite-field single to left to drive in McCormick.

"That was as good as I've seen a guy throw. He kept executing and executing," Texas manager Chris Woodward said. "I thought he was going to throw a perfect game, frankly. He had the pitch count to do it. Everything was right there for him. McCormick just hit a pretty good pitch there. ... Obviously the guy on the other side is pretty good, has a pretty good track record."

Before McCormick's double, the closest the Astros had gotten to a hit was when Jose Siri had a one-out comebacker in the sixth that ricocheted off the pitcher. Perez scrambled off the mound and made a strong throw to first for a bang-bang play that was ruled out - and stood after a replay challenge by Houston.

Texas got even at 1 in the bottom of the seventh, when Adolis Garcia had a sacrifice fly to center after the Rangers loaded the bases with three consecutive one-out singles off Verlander. That included a checked swing from Mitch Garver that turned into a groundball hit against a shifted infield.

"I feel good. We've done a good job communicating and allowing myself, especially with the short spring training, to kind of build my pitch county, kind of slowly allow myself time to recover in between starts," Verlander said. "It's the most I've thrown to this point, so hopefully just kind of keep building on it."

Perez was the first Rangers pitcher to retire the first 18 batters in a game since Mike Minor against San Diego on June 27, 2018. He was the second MLB pitcher to do that this season. Los Angeles Dodgers ace Clayton Kershaw retired all 21 batters he faced at Minnesota on April 13 before being pulled from his first start of the season after 13 strikeouts and 80 pitches. ... The only Rangers hit, and their only baserunner, before the seventh was No. 9 hitter Andy Ibanez with a sharp single up the middle in the third.

Astros: 2B Jose Altuve (strained hamstring) is scheduled to play rehab games for Triple-A Sugar Land on Friday and Saturday and could be activated from the injured list when Houston returns home Monday to start a series against Seattle. Altuve has been on the IL since April 19 and could have been activated as early as Friday. General manager James Click says Altuve wanted to play a couple of games to get his timing back before rejoining the Astros lineup.

Rangers: Catcher Jonah Heim was put on the paternity list after the birth Thursday morning of his second child, a daughter born just before 8 a.m.

Astros: Jose Urquidy (1-1, 3.15 ERA) is the the scheduled starter when Houston opens a three-game series Friday night in Toronto.