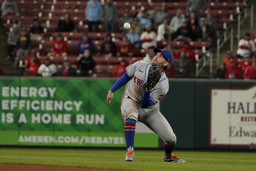 "Awesome," Bassitt said about the Mets' early dominance, "We started fast, but I'm more excited about the last six series of the year rather than the first six."

Bassitt (3-1) struck out six batters and allowed two hits and two walks. Drew Smith and Adam Ottavino combined to pitch two innings of scoreless relief before Edwin Diaz pitched a scoreless ninth for his third save in four opportunities.

"We had a good game plan going in," Bassitt said. "Just mixing speeds, mixing locations, and did that well."

But Bassitt is frustrated for and concerned about his teammates, who have now been plunked a major-league leading 18 times after Mets batters were hit three more times Tuesday night. The righty blamed the baseballs, which he says are "all different."

Cardinals starter Jordan Hicks hit Dominic Smith in the second and Pete Alonso was hit in the helmet by Kodi Whitley in the eighth inning, after which benches and bullpens started to clear. Both benches were warned, and tensions quickly fizzled down. Then Starling Marte was plunked by Aaron Brooks with the bases loaded in the ninth, leading to the final score.

Hicks (1-2) allowed two runs on two hits and two walks in two innings before being pulled in the top of the third inning after being struck on the right wrist by a Dominic Smith line drive in the second.

"It's the best I felt through two," said Hicks, who left with a right wrist contusion. The X-rays were negative. "I have full faith that it would have been a really good outing today, and my stuff was sharp until that moment."

Cardinals manager Oliver Marmol said that Hicks threw in the batting cage and "felt pretty good about it, went back out there, and after a couple pitches it started tightening up more and more, and that's when obviously we took him out."

Jeff McNeil doubled to right field to leadoff the third and scored on James McCann's ensuing double to the center field wall to give the Mets a 1-0 lead. Marte greeted rookie relief pitcher Andre Pallante with a single down the left field line to drive in McCann and put the Mets up 2-0.

The Cardinals have lost three straight for the first time this season.

Marmol lost his first challenge of his managerial career when he challenged second base umpire Charlie Ramos' call that McNeil beat Brendan Donovan to second base to get a force out to end the fifth inning. Plate umpire and crew chief Mark Wegner announced the ruling on the field stood. The Cardinals had won their previous four challenges in 2022.

The Mets have signed veteran right-handed relief pitcher Tommy Hunter on a minor league contract. The 35-year-old did not allow an earned run in 8 1/3 innings over four appearances with the Mets in 2021.

Mets: RHP Jacob deGrom is continuing to heal from a stress reaction in his right scapula. deGrom will begin strengthening activities but has not been cleared to throw.

The Cardinals will start LHP Steven Matz (2-1, 5.27 ERA) in his second career start against his former team.