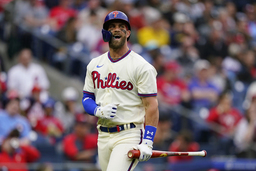 PHILADELPHIA (AP) Willy Adames timed his mad dash from third with catcher J.T. Realmuto's throw to second base. Realmuto's throw skipped into center field - and Adames slid into home to pull of the double steal and score the go-ahead run.

"We thought try something there," Brewers manager Craig Counsell said. "You've got to use that as a surprise play. Worked out well."

Adames stole home, Hunter Renfroe homered and Adrian Houser tossed six solid innings to lead the Brewers to a 5-3 win over the Philadelphia Phillies on Saturday.

The Brewers bullpen kept the game in check for Houser - Trevor Gott struck out two in a scoreless seventh, Devin Williams got Bryce Harper to hit into an inning-ending double play in the eighth, and Josh Hader earned his seventh save.

Phillies ace Zack Wheeler (0-3) had another unimpressive outing as he works his way back from right shoulder soreness. The 2021 NL Cy Young Award runner-up, Wheeler, who had retired 10 straight, allowed four runs in the fifth and lost his third straight start. Wheeler, who gave up seven runs over three innings in his previous start against Miami, threw 84 pitches and struck out five in five innings.

Wheeler said some unspecified adjustments he made between starts led to better velocity and a sharp cutter.

"I'm still building up, getting stronger and kind of getting into the swing of things," Wheeler said. "I think some of the adjustments we made unlocked a little bit of that."

The Brewers didn't hit the ball hard against Wheeler - but they did hit him. Trailing 3-0 in the fifth, the Brewers tied the game on RBI singles by Jace Peterson, Adames and Christian Yelich.

Yelich was on first and took off for a steal. Adames ran home and easily scored when Realmuto's throw skidded to second base and trickled into center field.

"We made a bad throw. It cost us a run," Phillies manager Joe Girardi said.

Renfroe's second homer of the season, a solo shot to right in the sixth off Christopher Sanchez, made it 5-3.

"Especially after giving up three runs, just try and get out there and get outs, get the guys back in the dugout and let them get on a roll," Houser said.

Houser finally got some run support to pick up his first win of the season. He lost his last start after giving up one run over 5 2-3 innings to the Cardinals. He struck out three and walked three against the Phillies.

"It's one of those games that shows how he's gotten better," Counsell said. "He ran into some trouble. Made a bad pitch. We messed up a play. Then he was just really, really good after that. He just kept putting up zeroes, kept fighting, kept making good pitches and that's why we won the game."

Harper, batting .345 with six RBIs over a seven-game hitting streak, doubled and scored on Nick Castellanos' double in the first. Jean Segura had an RBI single and Castellanos added a sacrifice fly in the third to make it 3-0.

Renfroe homered and went 3 for 4 to continue a strong week. He has two doubles, two homers, three RBIs and four runs scored over his last four games.

"We needed a big offensive game and Hunter kind of broke out with one," Counsell said.