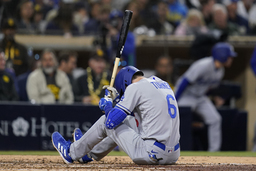 SAN DIEGO (AP) It was just a matter of time before Mookie Betts and Max Muncy broke out of season-opening slumps.

They were the first two homers of the season for Betts, who came in hitting just .178.

"He's going to sleep much better tonight. He's been grinding," manager Dave Roberts said. "So to get on base four times, hit a couple homers, hit a couple barrels, it was good. There was a big celebration after the game in his honor, so the guys were really fired up."

The Dodgers have outscored the Padres 57-23 in the winning streak, which started Aug. 24.

Betts and Muncy thrilled the several thousand Dodgers fans in the crowd of 44,482 at Petco Park by homering in the fifth inning. Betts also homered leading off the ninth for his 20th career multi-homer game.

Betts tied the game at 1 with an impressive 420-foot shot into the second deck in left field leading off the fifth. Muncy, who came in hitting .128 gave the Dodgers the lead with a moonshot that just cleared the wall in right field with two outs. It was his second.

"It felt great," Betts said. "I've been working, obviously putting in a lot of work. It's good to actually do it in a game."

Betts said he's been working on "just everything, man. It's kind of tough to focus on one thing when a lot of things are kind of going wrong. It's been a grind but my coaches, my teammates, have been great supporters, they've kept me going, kept me focusing on the next task at hand and so they deserve a lot of credit."

Said Roberts: "I love the way he's candid because he's been losing sleep. When you're a guy like that, you have high standards and expectations and you're not meeting them, you get frustrated. I know everyone's excited for him tonight."

Roberts said he sensed a weight come off Betts as he trotted around the bases after his first homer.

"We all sensed it," he said. "Just putting the barrel on it and running around the bases, you could see it. He's hit a lot of homers, but I think that one tonight felt pretty good."

Julio Urias (1-1) combined with five relievers on a four-hitter. Urias held the Padres to one run and two hits in five innings, struck out six and walked three.

Urias was happy for Betts.

"We know what kind of player he is. He's Mookie Betts," Urias said through a translator. "Obviously we expect that every day. I know he's been kind of going through it but we expect him to do those things and it's nice when he does it."

Muncy's homer chased Nick Martinez (0-2), who allowed two runs and four hits in 4 2/3 innings, walked five and struck out four. Martinez walked the bases loaded with one out in the third and then got Justin Turner to ground into a double play.

Muncy hit a two-run, bases-loaded single in the seventh and Trea Turner followed with a sacrifice fly.

Dodgers: Placed RHP Blake Treinen, their setup man, on the 10-day injured list with right shoulder discomfort. The move was retroactive to Tuesday, meaning he'll be eligible to return on April 29.

LHP Tyler Anderson (1-0, 2.25) will make his first start for the Dodgers on Saturday in place of LHP Andrew Heaney, who is on the injured list with left shoulder discomfort. The Padres will counter with RHP Yu Darvish (1-1, 6.28).