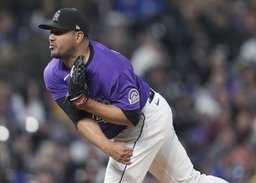 Cron hit a two-run shot in a four-run third inning and connected again leading off the seventh, driving the first pitch he saw from reliever Ethan Roberts into the left-field bleachers for his third homer in two games and fifth this season. That tied Vladimir Guerrero Jr. for most in the majors.

"I'm just trying to put a good swing on the baseball," Cron said. "The first one was up, a little bit up for me. I usually don't want to hit that pitch, but I got to it on time and it just went. It was just really nice to have a nice team effort tonight, scoring nine runs, and everyone 1 through 9 has been contributing. It's been awesome to watch."

So have Cron's homers. His first traveled 466 feet, the third-longest in the majors this season, and the second went 423 feet.

"There's a little awe factor there," Rockies manager Bud Black said. "That's raw power for you. He hits them a long ways when he gets them, and those two tonight were examples of that."

Alan Trejo had two hits and two RBIs, Connor Joe added an RBI triple and former Cubs star Kris Bryant drove in a run with a fielder's choice before being lifted in the fifth because of tightness in a quadriceps muscle. Black said the move was precautionary and Bryant could be back in the lineup as soon as Sunday at DH.

Patrick Wisdom had three hits, including a two-run double in Chicago's four-run seventh. Jonathan Villar had four hits and three RBIs for the Cubs.

Seiya Suzuki doubled in the second and has hit safely in each of his first seven games in which he had an at-bat to begin his major league career.

"I loved the fact that we fought here, being down that many and the guys continued to have good at-bats and gave ourselves a chance to win all the way up to the last out," Cubs manager David Ross said. "That happened last night as we were down and it happened tonight when we were down big, still giving ourselves a chance. In this offensive park, yes, but the at-bats are consistent and they're not chasing out of the zone."

Colorado added to its lead with three runs in the fourth, capped by a run-scoring single from Charlie Blackmon that put the Rockies in front 7-1.

Senzatela (1-0), who became the 13th pitcher in Rockies history to start 100 games, allowed one run and seven hits. He walked none and struck out two.

Daniel Bard got three outs for his fourth save in five chances.

Mark Leiter Jr. (0-1), recalled from Triple-A Iowa, made his Cubs debut and struck out the side in the first inning before running into trouble in the third. The son of former major league pitcher Mark Leiter went 3 1/3 innings and allowed seven runs on seven hits in his first major league appearance since Sept. 25, 2018, with Toronto against Houston. He missed the 2019 season after undergoing Tommy John surgery and was in the minors working his way back the past two years.

"Guys scored a lot of runs tonight and we should win that game," Leiter said. "That's on me 100%, to put us in that kind of hole. Wish it would have went a little bit better, to be honest with you. But there was a lot of emotion for the last couple years, a lot of adrenaline. I'm proud to be back and get in a game like that, but I want to be better than that."

Cron had his 14th career multi-homer game and first since Aug. 8, 2021, against Miami. He led the Rockies last season with 28 home runs.

The Cubs got on the board first thanks to Villar's third-inning RBI single. They have held a lead in each of their first eight games, though they dropped to 4-4. The 1938 Cubs hold the team record for most consecutive games with a lead to start the season with 19.

Senzatela got his first career pickoff in the first inning, catching Villar off first base. "We worked on that in spring training," Senzatela said. "It was the first time I got the guy. It was nice."

Rockies: OF Randal Grichuk went through a full range of baseball activities before the game and could return to the lineup as soon as Sunday after missing the previous three games due to back soreness. . SS Jose Iglesias was rested for a second consecutive game with a hamstring problem and remains day-to-day. Black said Iglesias is nearing full strength and could resume playing any day.