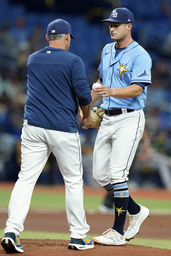 Montas (1-1) allowed two runs and five hits over 6 1/3 innings, striking out six, as the A's defeated Tampa Bay for the second time in three days.

"He went out tonight and he had his good stuff," Oakland manager Mark Kotsay said. "Split down in the zone, fastball had some real life to it, Got deep into the game for us, and that was much needed. It was a great night for Frankie."

Tampa Bay got a fourth-inning solo homer from Ji-Man Choi.

After Jed Lowrie and Stephen Piscotty drew two-out walks in the third, Murphy took Shane McClanahan (0-1) deep to put the A's up 3-0. Murphy's homer was his first this season.

"I think I made a lot of good pitches today, and made one really bad pitch," McClanahan said. "Back-to-back walks, I don't know what that was ... haven't done that a lot. It was just kind of a frustrating day. I thought I threw the ball well, and the results weren't there."

Lou Trivino, the third Oakland reliever, got out of a two-out jam in the ninth for his first save. After giving up a single to Francisco Mejia and walking Brandon Lowe, the righty induced a foul popup from Wander Franco.

"With Lou getting back in there and having success tonight, that was great," Kotsay said.

Yandy Diaz cued a leadoff single to right in the seventh before Josh Lowe reached when second baseman Sheldon Neuse misplayed his grounder. Montas left after striking out Manuel Margot, and was replaced by Kirby Snead, who gave up Mejia's two-out flared RBI single into center that got the Rays within 4-2.

McClanahan gave up three runs, two hits and three walks, and struck out eight in 4 2/3 innings.

Oakland took a 4-1 lead in the seventh on Cristian Pache's RBI single.

The Rays selected reliever Dusten Knight from Triple-A Durham and he allowed one run in 2 1/3 innings. The 31-year old, in pro ball since 2013, is known for doing back flips after saves, which he started doing in Double-A in the San Francisco organization.

"The rover (instructor) there was Will Clark, Will the Thrill," Knight said. "He says to do it and he gives the OK, absolutely I'm doing it."

Knight began doing back flips at age nine as a wrestler. He appeared in seven games with Baltimore last season.

The Rays retrieved Brett Phillips' homer that remained on an overhanging catwalk Tuesday night and will give it to 8-year-old Chloe Grimes, who has cancer for a second time. Grimes was being interviewed about Phillips, her favorite player, on the Rays' TV broadcast when he homered.

Athletics: Kotsay declined to say if the Oakland roster will be impacted by a Canadian requirement that visitors be vaccinated for COVID-19. The A's play Friday night at Toronto. ... Right-hander Deolis Guerra had right elbow ulnar collateral ligament reconstructive surgery, which was done by Dr. Keith Meister in Arlington, Texas.