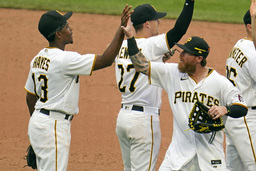 PITTSBURGH (AP) Ben Gamel hit a three-run homer in the first inning, Ke'Bryan Hayes went 4 for 4 a day after getting a big contract and the Pittsburgh Pirates beat the Chicago Cubs 6-2 on Wednesday for a two-game series split.

Kevin Newman hit a two-run triple in the third for the Pirates, who went 3 for 7 with runners in scoring position, a day after going 0 for 10.

Pittsburgh got to Chicago starter Kyle Hendricks (0-1) for six runs on seven hits and four walks hits in 3 2/3 innings - three of the players who walked went on to score.

"He throws the ball on the edges," Pirates manager Derek Shelton said. "The thing that stood out today was that we didn't chase balls to the edges. . I thought our approach was outstanding and that's what let us be able to do that."

A day after getting a $70 million, eight-year contract, Hayes singled with two outs in the bottom of the first. Yoshi Tsutsugo walked on four pitches and Gamel reached down for a low changeup and lifted it for his first home run this season.

Hayes doubled with one out in the third, Gamel walked with two outs and Newman tripled off the Clemente Wall in right field. Hayes added an RBI single in the fourth that scored Hoy Park.

Seiya Suzuki was 1 for 3 with an RBI single in the fourth for the Cubs. In his first season in the major leagues, the two-time Japan Central League batting champion is 6 for 20 (.400) with three homers and nine RBIs in six games.

Willson Contreras put the Cubs ahead when he homered in the first off Zach Thompson, a 453-foot drive.

Thompson gave up two runs and five hits in four-plus innings. He was stuck on the back of the right shoulder by a Nico Hoerner line drive in the fifth, and left the game with a bruise. Thompson said after the game he doesn't anticipate missing any time.

Dillon Peters (1-0) relieved Thompson and escaped a bases-loaded, one-out jam in the fifth when Hayes started a 5-4-3 double play.

"Offensively, we had a couple of chances," Cubs bench coach Andy Green said. "We had them on the ropes, but couldn't claw our way back."

Wil Crowe gave up just one hit over the final three innings, throwing 50 pitches for his first professional save.

Green managed most of the game for the second straight day, as manager David Ross left early in the day with an illness. Ross served a one-game suspension on Tuesday.

With a shortened spring training and starters that are not yet fully stretched out, the Pirates took a different tact in building a bullpen, moving starters Peters and Crowe into multi-inning relief roles, a plan that played to perfection on Wednesday.

Cubs: RHP Alec Mills (back) won't be activated for the upcoming series in Colorado. He threw a 77-pitch bullpen session Sunday but has also been dealing with an illness. Chicago has not announced a starter for Saturday's game.

Pirates: OF Greg Allen had a platelet-rich plasma injection in his injured left hamstring. . LHP Sam Howard (back) threw batting practice and will make a rehab appearance next. . Top pitching prospect Quinn Priester will miss two more weeks with an oblique injury.

Pirates: RHP JT Brubaker (0-1, 12.00) will start a four-game home series against the Washington Nationals on Thursday.