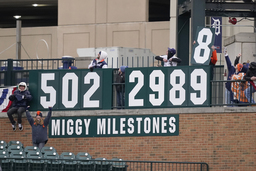 Cease (1-0) allowed one run and two hits in five-plus innings with eight strikeouts and three walks. He is 9-0 against the Tigers.

"I don't want to jinx myself, but the results have been good so far," Cease said of his success against Detroit.

"He was outstanding," La Russa said. "They've got a nice club over there and he was just rock solid, in command of all of his pitches. When he got a little out of sync, he got right back on it. That's what he started to do midseason on. He's a quick learner."

Cease's take on his first start this season was a little bit different. He relied upon his slider more than usual.

"I feel like I was kind of a one-trick pony a little bit with the slider," he said. "That was the pitch I had the best feel for. Sometimes, you have those games where you just have to compete with what you've got."

Aaron Bummer gave up singles to Miguel Cabrera and Jonathan Schoop starting the ninth, then struck out Eric Haase, Spencer Torkelson and pinch-hitter Dustin Garneau for his first save.

Chicago's A.J. Pollock left because of right hamstring tightness after he singled leading off the third and took a wide turn at first. Pollock is off to a 4-for-7 start since he was acquired from the Los Angeles Dodgers on April 1 for closer Craig Kimbrel.

Eloy Jimenez hit a two-run single with two outs in the first. Jose Abreu had two hits and scored twice for the White Sox, who rebounded from a 5-3 opening-day defeat.

Grandal homered on a 1-1 fastball in the sixth, driving the ball over the right-field wall for a 4-0 lead.

"I think he earned it," he said. "He was at 70-some pitches and other than the first inning he'd been able to navigate pretty efficiently. We need our starters to take on a lot of innings."

Cease was replaced by Reynaldo Lopez after allowing Austin Meadows' leadoff single in the sixth. Jeimer Candelario had an RBI double.

.Javier Baez was thrown out trying to score from third when a pitch glanced off Grandal's glove, and the catcher threw to Lopez covering the plate.

"They work on that in spring training," La Russa said. "That's a key play in the inning. That did a lot to help us."

Schoop drove Candelario from third with a grounder that shortstop Leury Garcia bobbled for an error.

Andrew Vaughn added an RBI single in the seventh.

"We just didn't do enough to win this game and they did," Hinch said. "It had nothing to do with Casey. Just had to do with the way the game went."

Chicago's Tim Anderson served the second game of his two-game suspension for making contact with umpire Tim Timmons during the ninth inning of a game on Sept. 27. Anderson is expected back in his leadoff spot Sunday.

White Sox SP Lucas Giolito will be placed on the 10-day injured list due to a lower abdominal strain. Giolito was injured during the fourth inning of the team's opener on Friday. "Optimistically, maybe a couple of starts," manager Tony La Russa estimated of the pitcher's layoff.

White Sox: RHP Michael Kopech (4-3, 3.50 ERA in 2021) will start the finale of the three-game series. Kopech, who started in four of his 44 appearances last season, only pitched four spring training innings.