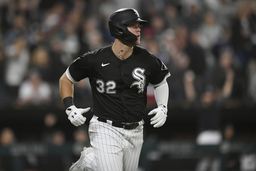 The Reds (82-76) had won four straight but were knocked out of the NL playoff hunt mid-game when the St. Louis Cardinals beat Milwaukee to lock up the second wild card.

The White Sox (90-68), who clinched the AL Central last Thursday, have won three straight. They remain 2 1/2 games behind Houston for home-field advantage in the first round of the AL Division Series.

Robert has hit 11 home runs in 39 games since returning from the injured list Aug. 9. He hit a solo shot in the first off Riley O'Brien (0-1), who was making his major league debut. Robert added a two-run shot in the eighth off Amir Garrett.

"He's got his ego in check," White Sox manager Tony La Russa said. "It gives him a chance to be very good for a long time."

Yoan Moncada and Gavin Sheets also homered for the White Sox. Sheets, who connected off Luis Cessa in the fourth, added an RBI single during a two-run sixth.

Lopez (4-3) didn't walk a batter and hasn't issued a walk over his last 11 1/3 innings. After allowing a single to Joey Votto to start the second, Lopez retired his next 10 batters.

This was Lopez's longest outing since he pitched eight innings in a 7-1 win over Detroit in the first game of a doubleheader on Sept. 28, 2019.

Lopez believes he has pitched well enough to earn a spot on the playoff roster, which will be discussed Friday.

"That's something that's not in my hands," Lopez said. "I'm doing all they're asking me to do."

Eugenio Suarez ended Lopez's shutout bid with his 30th homer with one out in the fifth. Suarez joined teammates Votto and Nick Castellanos in the 30-homer club. This marked the fifth time in franchise history that a trio of Reds have hit at least 30 homers in a season.

O'Brien, who was 7-7 with a 4.55 ERA in 23 games at Triple-A Louisville, started in place of Luis Castillo, who is on the family medical emergency list.

"My mechanics weren't too crisp and could have been better," said O'Brien, who said he pitched in front of 40 family members and friends.

"Even when he hit me, he didn't apologize or say anything," Abreu said. "And that's fine. But then I slid into second base and he started chirping, that's not good, you don't do that."

Reds: None of the six players on Cincinnati's 10-day injured list will return this season, Bell said.