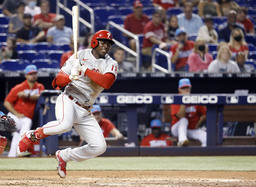 MIAMI (AP) Lewis Brinson hit a go-ahead two-run homer in the bottom of the eighth inning and the Miami Marlins rallied to beat the Philadelphia Phillies 3-2 Saturday night.

Brinson's opposite-field shot off reliever Archie Bradley (7-3) ricocheted off the inside of the foul pole in right field for his eighth homer, punctuating a three-run inning.

"I was trying to be on top with the fastball, which I felt kind of late all day, and just be on time," Brinson said. "And I was still late. Luckily, it went out with a good enough swing."

Bryan De La Cruz hit a leadoff double and scored on Miguel Rojas' RBI single. Bradley struck out Jazz Chisholm Jr. and Jesus Aguilar before Brinson ended an 0-for-9 funk with the homer.

"I know he's struggled a little bit recently, but that was obviously a big hit for him and for us," Miami manager Don Mattingly said.

Anthony Bass (2-7) struck out the side in a scoreless eighth, and Dylan Floro followed with a scoreless ninth after a leadoff walk, picking up his eighth save.

The Phillies, who began Saturday two games behind NL East-leading Atlanta, dropped their second straight after a six-game winning streak.

"Losing these two games did not end our season," Philadelphia manager Joe Girardi said. "There are 27 games left and we've got to play better."

The Marlins improved to 8-7 against the Phillies and will attempt to go for the series sweep Sunday.

"That's a game we should win and to blow that game it stings, it hurts," Bradley said. "You regroup. We're grown men. We're professionals. We're going to go home get some sleep and we're going to show up and be ready to play (Sunday). A win will go a long way for us."

Andrew McCutchen hit a leadoff homer and pitcher Ranger Suarez added an RBI double in the fourth inning, giving Philadelphia the lead. McCutchen's shot off Trevor Rogers landed over the wall in left-center. Suarez's opposite field line drive to left scored Didi Gregorius, who walked and advanced to second on an errant pickoff throw by Rogers.

Suarez lowered his ERA to 1.38 in five scoreless innings since becoming a starter Aug. 2. The left-handed former closer struck out seven and walked two.

Although his outing ended after 71 pitches, Suarez agreed with the decision to remove him. He said discomfort in his left triceps prompted the removal.

"I feel my arm getting tired because it's been two years since I started games," Suarez said. "I feel I'm going to get better. I'm not worried about my next start."

Rogers made his first start since July 31 after a stint on the restricted list. The left-hander allowed two runs and six hits, struck out three and walked two in 4 1/3 innings and 83 pitches. Miami's NL All-Star representative, Rogers remains winless since June 10.

"Definitely rusty at first," Rogers said. "It was great to be back in that atmosphere."

Before the Marlins' late rally, relievers Zach Pop, Steven Okert, Richard Bleier and Bass kept the Phillies from expanding their lead. J.T. Realmuto's leadoff infield single in the eighth was the only hit allowed by the four.

Rookie Matt Vierling played yet another position in his 10th major league game Saturday. Vierling was Philadelphia's starting first baseman as the club uses additional options to replace Rhys Hoskins, who is out for the season after undergoing core surgery to repair an abdominal tear. During his early tenure with the Phillies, Vierling already has played all three outfield positions in addition to his start at first.

Phillies: 3B Alec Bohm has experienced a sore wrist during the past week while at Triple-A Lehigh Valley. Bohm was optioned to the minor league club Aug. 22.

The Phillies have not announced a starter for the series finale Sunday. RHP Elieser Hernandez (1-1, 3.62) will start for the Marlins.