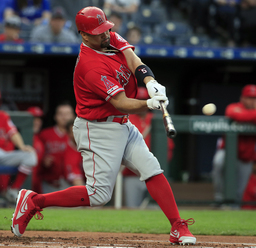 "It's going to be a parade of good names for the remainder of his career," Angels manager Brad Ausmus said. "I had the . I'll call it pleasure now . to play against him quite a bit in the first half of his career. Between (him) and Barry Bonds, they were the two best players I played against. (Albert is) one of the best right-handed hitters in the history of the game, top five for sure."

"It's a great accomplishment to be able to pass one of the best players to play the game," Pujols said. "At the end of the day, it's great that we got two runs on the board (with his home run).

"I'm one of those players who is going to look at it when I'm done playing the game. I really don't get caught up in the numbers. When I'm done, I think I'm going to have more time to look back and say, `Wow, what an amazing career.'

Lost in the excitement of Pujols' milestone was the effort of Skaggs (2-2), who continued to baffle the Royals at Kauffman Stadium. He has allowed just one earned run over 26 innings (0.35 ERA) in four starts. He now has the best ERA all-time in Kansas City (0.35) with a minimum of 20 innings. In four starts against Kansas City, the Royals have hit .227 against (17-of-88, .193 average, with three doubles).

"I think I've asked this question a few times," Skaggs said of how he's been so dominant against the Royals. "It's special to me because you work so hard to return from Tommy John. This place always has a soft spot in my heart. I'm happy I can keep it rolling."

"A lot of first-pitch change-ups," he said. "A lot of slow stuff early in the count, then spotted his fastball well later in the count."

The Royals' Danny Duffy (0-1) gave up three runs on five hits in five innings in his first start of the season after spending the nearly two months on the injured list with left shoulder impingement.

Duffy struggled in the first inning, allowing two runs on three hits. He gave up another run in the fifth on a two-out double by Andrelton Simmons.

The Angels got their fourth run in the sixth on a sacrifice fly by Luis Rengifo. It was Rengifo's first career RBI. The Angels added another run in the eighth on Kole Calhoun's seventh homer of the season.

Pujols passed Gehrig by hitting a 2-1 pitch to left-center that traveled 430 feet.

The Royals nearly got to Skaggs in the fourth. With two outs, Alex Gordon and Hunter Dozier singled and Jorge Soler drew a walk. But Skaggs got Ryan O'Hearn to swing at a 3-2 fastball.

The Royals got a run in the ninth on a sacrifice fly by Adalberto Mondesi.

Angels OF/RHP Shohei Ohtani continues to take live batting practice in his attempt to return from Tommy John surgery. He underwent the operation Oct. 1, 2018. ... OF Mike Trout was the DH against the Royals, but manager Brad Ausmus said it was because the Angels got in late following a late 11-5 victory over the New York Yankees in Anaheim.

Royals 3B Hunter Dozier was back in the lineup, but not on defense. He served as the designated hitter. He came out of Monday's game in Tampa with back spasms. Kansas City manager Ned Yost said Dozier probably would be the DH for a couple of days. "He's making progress. He's feeling better. He feels good today, but he'll probably DH for a couple of days until he's feeling better."

The Angels reinstated LHP Tyler Skaggs from the 10-day injured list, where he'd been since April 13 with a left ankle sprain. He took the spot of RHP Cody Allen, who was placed on the 10-day IL with a lumbar spine strain. "It first came up probably three or four days ago," Los Angeles manager Brad Ausmus said. "We actually had a game where it locked up in the bullpen; he was unavailable. It seemed to be better the next day, and then better even more the following day. Just prior to coming out from his last outing, he said that it tightened up again."

The Royals activated LHP Danny Duffy from the 10-day IL. He made his first appearance - and first start - of the season against the Angels on Friday night. Duffy was placed on the injured list with left shoulder impingement syndrome during spring training. He had one appearance at Double-A Northwest Arkansas (five innings, four hits, one unearned run and seven strikeouts). To make room, the Royals optioned LHP Tim Hill to Triple-A Omaha. Hill was 0-0 with a 6.75 ERA in eight relief appearances.

The Royals also placed 1B Lucas Duda on the 10-day IL (retroactive to April 24) with a lumbar strain, and recalled IF Kelvin Gutierrez from Omaha. Gutierrez was hitting .333 (22-for-66) with a double, two homers and 10 RBI in his first 18 games with the Storm Chasers this season.

Angels RHP Jaime Barria (2-1, 4.26 ERA) will take the mound for the first time against the Royals. He is in his second stint with the club, after being recalled from Triple-A Salt Lake on April 15.

Royals RHP Jorge Lopez (0-2, 4.50 ERA) will pitch for the Royals. He has pitched at least six innings in each of his four starts this season, including seven against the Yankees in New York in his last start (no decision).